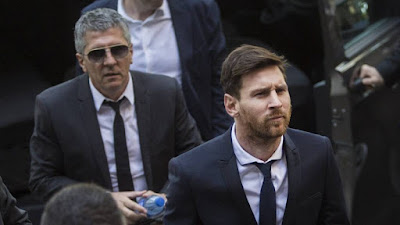 Jorge Messi, the father of Barcelona’s Lionel Messi, has arrived in the UK and is already negotiating with Manchester City, RAC 1 reports.

The player has made it known to the LaLiga club via fax, that he wants to leave this summer.

Several top European teams have been placed on high-alert, including City and Paris Saint-Germain.

However, Messi prefers a reunion with Pep Guardiola, who he worked with for four years at the Camp Nou.

It is believed his father is discussing a two-year deal with City, although there are still question marks over if the Premier League side will have to pay a transfer fee.

Messi believes he can activate a clause in his contract, which makes him a free agent at the end of a Barcelona season.

However, Barca insisted that the clause expired in June, which would mean either Messi or City would have to pay the player’s £630million release clause at the club.