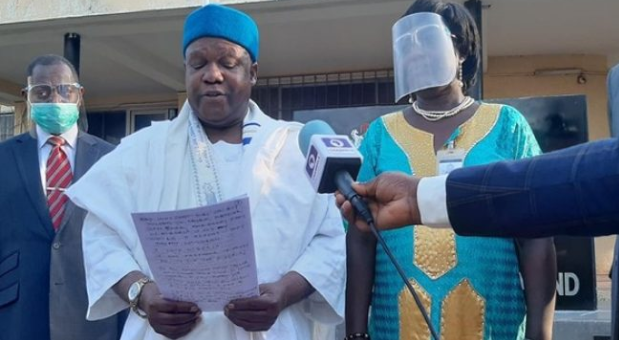 The Department of State Services (DSS) has described as fake news the claim by Obadiah Mailafia, a former deputy governor of the Central Bank of Nigeria (CBN), that a governor from the north is the leader of Boko Haram.

The secret police on Wednesday invited Mailafia to its office in Jos, Plateau state capital, over the claim he made while being interviewed on a radio station in Abuja on Monday.

Peter Afunanya, DSS spokesman, said in a statement that as a directing staffer at the National Institute for Policy and Strategic Studies (NIPSS), Mailafia has unfettered access to security agencies to “share the so-called information at his disposal”.

He added that Mailafia’s “outburst” gives credence to the DSS’s alert “about desperate efforts by some notable personalities to cause a total breakdown of law and order”.

The DSS said: “With latest occurrences in the country, Nigerians may have no reason to doubt the Service’s earlier pronouncement. Dr. Obadiah Mailafiya’s recent outburst aimed at playing to the gallery and creating unnecessary tension is a confirmation of his group’s desperation to breach the peace.

“Mailafiya, as a former Deputy Governor of the Central Bank of Nigeria (CBN) and currently, a Directing Staff at Nigeria’s foremost Policy Research Institute, the National Institute for Policy and Strategic Studies (NIPSS), Kuru, has unhindered access to government platforms. It is expected that he should be conversant with official information management protocols.

“But regrettably, he chose to cross the lines of decorum and conduct expected of a personality of his status. It is disappointing that he never took advantage of these to reach any of the security or related agencies to share the so-called information at his disposal. This, he has agreed to be a grievous error on his part. It, however, suggests his mischief and determination to use the fake news he spewed to incite the people under his control.”

After his release from the custody of the secret police, Mailafai said he stood by his claims.

But the DSS said, on the contrary, Mailafia agreed that he erred and apologised.

“It is even more condemnable that Mailafiya, who had profusely apologized during his visit to the Service’s Plateau State Command for his ignoble statement, would, afterwards, announce to the world that he stood by his misguided eruption,” it said.

The service warned that it “will not stand idly and watch disgruntled and aggrieved elements take laws into their hands and cause mayhem in the polity”.