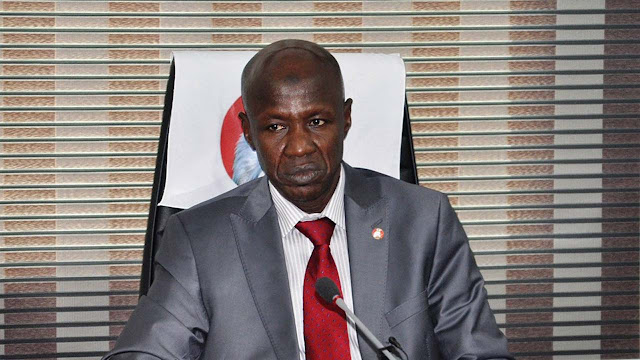 Transparency groups based in Italy and the UK have called for public access to the trial of Ibrahim Magu, suspended chairman of the Economic and Financial Crimes Commission (EFCC).

Magu was arrested and detained for 10 days following allegations of corruption and abuse of power levelled against him.

President Muhammadu Buhari had thereafter suspended Magu as he is currently under investigation by the presidential panel headed by Ayo Salami, retired president of the appeal court.

In a letter addressed to Salami on Thursday, the groups — Re:Common, The Corner House and Global Witness — said Magu’s trial may affect Nigeria’s image in the international community.

The letter was signed by Lucas Manes for Re:Common, Nicholas Hildyard for The Corner House and Simon Taylor for Global Witness.

The three groups, which have assisted Nigeria in retrieving stolen funds and assets, are currently behind the prosecution of oil giants said to have swindled Nigeria of billions of dollars in the infamous OPL 245 deal.

They said Nigerian partners abroad are concerned that Magu’s removal may have been orchestrated by those against the anti-corruption war.

The groups said although the rule of law exists, the ongoing trial appears to have indicted Magu of the allegations through media trial.

“We can report that as things stand, these apparent failures of due process have already seriously dented the confidence of a number of key international partners in Nigeria’s fight,” the letter read.

“If this situation is not radically and urgently changed, some may well conclude that the President’s fight against the corrupt was merely a token gesture, a passing phase, to be discarded when the going got too tough.”

The partners raised concerns over certain developments in the trial of Magu, including his “detention and subsequent denial of the action by both the panel and the police; the failure to serve Mr. Magu with a copy of the complaint against him for several weeks; the suspension of 12 officials (investigators and prosecutors) of the EFCC without query, interrogation or any other expected standard treatment for such an action; the appearance of several conflicting allegations in the media without any official statement from your committee; appearances of those under trial for corruption before the panel; and the predictions of the Panel’s conclusions in the media by both politicians and aides of the President.”

They expressed worry about the failure to allow Magu cross-examine his accusers and witnesses and that of the panel to reveal its mandate, terms of reference and the timeline within which it expects to be operating.

The groups said under Magu, they have been “enormously impressed with the tenacity, skills and performance” of the EFCC, and called on the presidential panel to ensure public access to Magu’s trial in order to ensure credibility and boost public trust.

“The above factors combine to give an impression that something is very wrong in the action that has been taken against Mr. Magu, and they could even be seen to imply a process that has already been determined,” the groups added.

“We appreciate that the extraordinary conditions imposed on us all by the COVID-19 pandemic make public processes more difficult, but the use of internet together with a number of excellent applications, has demonstrated that this can easily be overcome, and for next to zero cost.

“As such, we would be very grateful if you would inform us about when meetings are taking place and how we may access online the procedures such that we can monitor and report on your on-going deliberations.”