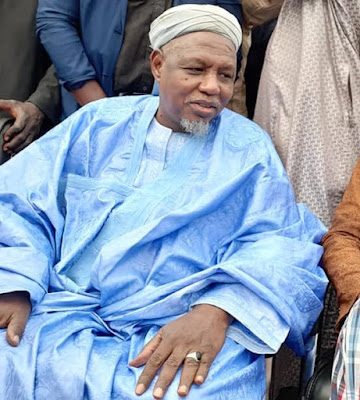 If ECOWAS leaders want to restore democracy in Mali, the man they need to woo is Imam Mahmoud Dicko, the mullah who led the two month revolt against President Boubacar Keita.

But for now, he appears solidly in support of the coup plotters who have taken control of the country.

Dicko is the Malian version of Ayatollah Khomeini of Iran, who led the revolt against the Shah of Iran in 1979.

Malian opposition to Keita’s government calls Dicko ‘the religious guide’. And like Ayatollah, he is a cleric and also a politician.

The 66 year-old Dicko is a Saudi-trained Muslim cleric and hugely popular. He backed Keita until they fell out in late 2017 over, among other things, the president’s choice of Soumeylou Boubeye Maiga as prime minister.

As a religious leader, he wants the government to negotiate with jihadist groups.

Last year, he stepped down as head of the influential Islamic High Council, but he said the action was not a prelude to his gunning for a political post. He said, on the contrary, he was retiring from politics.

What he didn’t say then was that he would rally a coalition against Keita.

On Friday, he led the M5-RFP leaders to a rally at Independence Square in Bamako, in support of the armed forces and the Colonel Assimi Goita-led CNSP. It was also a rally of celebration of victory against Keita.

Thousands of Malians were at the rally, reported L’Essor, the country’s main newspaper.

The prominent politicians, leaders of the protest movement, present at the rally were Choguel Kokalla Maiga, Montaga Tall and Cheick Oumar Sissoko .

During the rally, the movement welcomed the resignation of President Keita and his regime.

The leaders also castigated the ECOWAS leaders for adopting severe economic sanctions against the country.

Kokalla Maiga, one of the leaders, said it was wrong for ECOWAS to close the borders against the country.

According to him, international conventions prohibit the closure of borders to a landlocked country.

Imam Dicko, who also spoke at the rally regretted the acts of vandalism and looting.

Throughout his speech, Dicko advocated non-violence against revenge.

“We must come together today in order to drive out the demon of division and hatred. It’s time”

To the military, Dicko asked them to respect their oath and their commitment to the people.

A delegation of the military committee led by Colonel-Major Ismaël Wagué, spokesperson and Colonel Malick Diaw, deputy president of CNSP joined the rally.

“We are happy to be with you this afternoon. We thank the Malian people. Our job has been to complete your fight ”, declared CNSP spokesperson Col-major Ismaël Wagué.

Now the movement that toppled him, along with Dicko and the soldiers, believes that the fight has been won.

On Tuesday, a group of soldiers, from the Kati garrison, mutinied, deposed Keita and his government and arrested him and his Prime Minister Boubou Cissé, as well as some other ministers.

The arrests are continuing, according to local media.

What may cause a showdown between Dicko and the M5-RFP on one hand and the military on the other, is if they fail to announce a credible transition programme.

This was made clear at the Independence Square rally, when Kokalla Maiga, speaking for all the other politicians called for an urgent “ civil transition” for “a new Mali”.