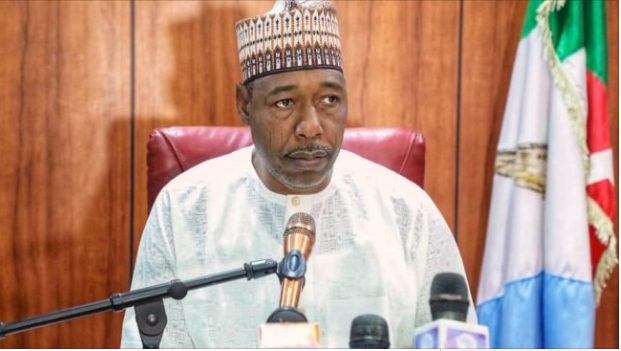 Babagana Zulum, governor of Borno state, says he is critical of the Nigerian army so that they can improve in their fight against insurgency.

Zulum said this on Thursday when he commissioned the Tukur Buratai Institute for War and Peace, located in Biu local government area of the state.

The institute is named after Tukur Buratai, chief of army staff.

The governor has come down hard on the army in recent times.

In January, he accused troops of extorting road users.

He also threatened to replace soldiers with local hunters if they are unable to secure Baga following the attack on his convoy in June.

While the attack was believed to have been carried out by Boko Haram insurgents, Zulum accused the military officials of sabotage, alleging that they were the ones who attacked him.

The military had, however, asked Zulum to quit demoralising troops with his comments.

Speaking at the venue of the commissioning, Zulum said he is not unappreciative of the soldiers’ efforts.

He explained that, instead, his “occasional” critical comments are meant to encourage them to do more.

“I am not unaware of where we were before the inception of the Buratai leadership and the successes recorded by the military in the war against terror. We appreciate the sacrifices of lives and deaths of our gallant officers. We shall continue to support our armed forces,” Zulum said.

“When we occasionally criticise, we do so with a view to improving on our successes and not out of lack of appreciation.”

The institute is an off campus section of the Nigerian Army University which is located in Biu town.

It was previously the army’s national museum, established in 2016.

The governor explained that the Tukur Buratai Institute for War and Peace will promote research on issues such as terrorism, insurgency and all forms of conflict with a view to attaining peace.

He noted that the effect of insurgency in the state has depleted, and pledged his administration’s readiness to partner with the institution.

“This is a very welcome development. I can assure you of the absolute support of the government and people of Borno state for such noble venture,” he said.

“You are all aware of the depleting effect of Boko Haram insurgency in Borno, neighbouring states, and indeed adjoining countries of Niger, Chad and Cameroon. Our dear state, Borno, is the worst affected with many of our citizens in the IDP camps.

“With the level of destruction of infrastructure and displacement of people from their communities, we have the onerous task of rehabilitating the people, so that they will return to start their means of livelihood.

“That’s why the Borno state government is importing a lot of its resources to empower the people and encourage them to return to their communities. The Nigerian army has been a reliable partner in this endeavour.”