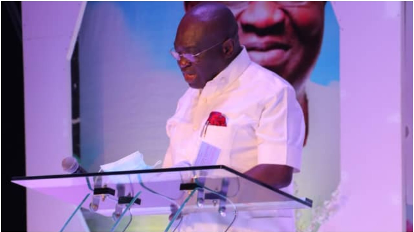 Governor Okezie Ikpeazu of Abia State has thanked God for sparing in life during his battle with COVID-19.

Ikpeazu expressed his gratitude at a thanksgiving event held at the Eastern Union Conference of Seventh-day Adventist Church, Osisioma Aba.

The Governor who was joined by Governor Emmanuel Udom said his recovery from COVID-19 has further strengthened his faith in God, admitting that if not for the faithfulness of God he would have been a dead man.

Testifying before the congregation, Ikpeazu thanked the team of doctors whom God used to restore his health, as well as the clergy and the people of Abia State who supported him in prayer.

He stated that he has forgiven those who wished and prayed for his death while he was down with COVID-19 and promised to join hands with his governor colleagues from other states in completing the ongoing building of three thousand capacity Auditorium of the Seventh Day Adventist, Hill Top, Aba.

He, however, thanked the Deputy Governor, Sir Ude Okochukwu, the Speaker, Abia House of Assembly, Rt Hon. Chinedum Enyinnaya Orji, the State Chief Judge, members of the State Executive Council among others who piloted the affairs of the State while he was away.

Speaking at the event, Governor Udom described the trial as the true test of faith.

He thanked God for using the health of Governor Okezie Ikpeazu in proving himself as the only true living God.

In his remarks, the Speaker of Abia State House of Assembly, Chief Chinedum Enyinnaya Orji, thanked God for restoring the health of the Governor and urged him to concentrate on delivering democratic dividends to Abians even as he restated the commitment of the legislative arm in providing Governor Ikpeazu with the legal support to serve Abians.

According to him, “God has disappointed all those who wished you death and the same God will continue to uplift you in the service of our people”.

In his sermon titled “O, Taste and See that the Lord is Good”, Dr Bassey Udoh, the President of Eastern Nigeria Union Conference (ENUC) of the Seventh Day Adventist Church, described the event as an opportunity to thank God for His healing mercies upon Governor Okezie Ikpeazu, adding that the Word of God clearly states that the Lord’s faithfulness remains everlasting.

He thanked everyone that prayed for and supported the Governor during his travail with COVID-19 and prayed that God’s divine power would continually intervene in every area of the State, adding that there is no better way to taste the Lord than through trials.