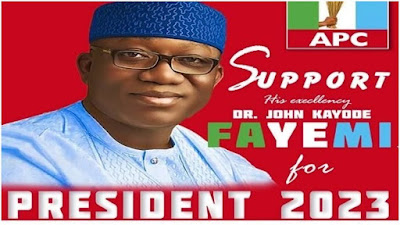 Governor Kayode Fayemi of Ekiti State has reacted to his 2023 presidential campaign posters which flooded social media on Wednesday.

The posters, which went viral on social media on Wednesday had pictures carrying Fayemi’s photograph as a contestant on the platform of the ruling All Progressives Congress, APC.

Gov. Fayemi, in a statement made available by his Chief Press Secretary, Yinka Oyebode, warned those behind the posters to stop distracting him from performing his primary duties.

The posters, which have become a subject of political debate on different social media platforms was sponsored by the Chairman of Ikere Local Government Area of Ekiti State, Mr Femi Ayodele.

The statement read in part: “The attention of Governor Kayode Fayemi, has been drawn to news reports of a campaign poster being purportedly circulated online by Femi Ayodele, the Chairman of Ikere Local Government Council.

The governor warned Mr. Ayodele and other groups canvassing support for Gov. Fayemi ahead of the 2023 presidential election through the poster which was designed with the logo of the All Progressives Congress (APC) to steer clear of such actions.

“This should also serve as a note of caution to political appointees, government functionaries, political associates and groups to operate within the ambit of decency and steer clear of actions that are capable of distracting the government, the party and the governor,” the statement added.