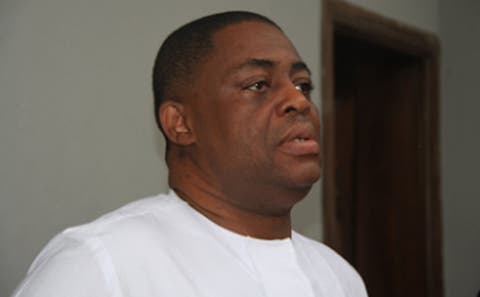 A former Minister of Aviation, Chief Femi Fani-Kayode, has apologised for referring to a journalist, Eyo Charles, as “stupid”.

Fani-Kayode said this in a statement on Wednesday.

He said, “I met with my advisors till late last night and I wish to say the following. I hereby withdraw the word ‘stupid’ which I used in my encounter with a journalist in Calabar. I have many friends in the media who I offended by losing my cool and using such words. I hereby express my regrets for doing so.”

The former minister, however, denied allegations that he was threatening to harm the Daily Trust reporter.

“I do, however, wish to state categorically that no threat of physical harm was ever made to the journalist in question and neither did I send anyone to threaten him. Anyone that says otherwise is lying and I challenge them to bring the proof.

“I would never seek to physically harm a journalist. For the last 30 years I have defended and worked with journalists and fought for the right of freedom of expression,” he said.

Fani-Kayode said he remained a friend of the media and would be the last to seek to disparage those that are honourable and noble within its ranks.

The former minister had come under heavy criticism for calling the reporter ‘stupid’ during a press conference in Calabar, the Cross River State capital.

In a video that has since gone viral on social media, Fani-Kayode is seen giving the Daily Trust reporter a dressing down for asking him a “stupid question”.

The journalist was said to have asked Fani-Kayode who bankrolled his recent tour of several southern states.

However, the former minister, who was infuriated by the question, said the journalist was stupid.

He said, “I am saying this on live TV. What type of stupid question is that? Bankrolling who? Do you know who you are talking to? I will not take any questions from this man. What type of insulting question is that? Which bankroll? To do what? Who can give me money for anything? Who do you think you are talking to? Go and report yourself to your publisher? Please don’t insult me here. I don’t want to take any questions from this man.

“I could see from your face before you got here, how stupid you are. Don’t ever talk to me like that. Who do you think you’re talking to? Bankroll who? You think I am one of those ones you… from who, when, how? You have a small mind, very small mind. Don’t judge me by your own standards.”

The Nigeria Union of Journalists had condemned the former minister while the management of Daily Trust had threatened to report to the police if any harm came to its reporter.