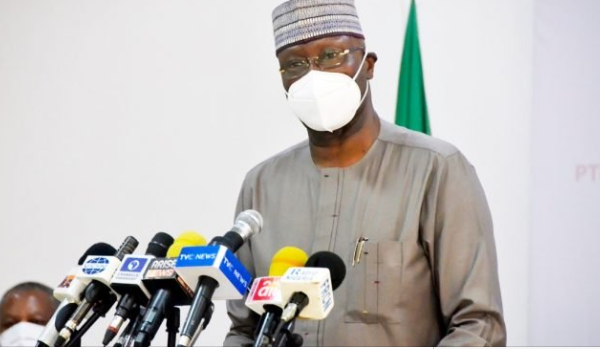 With over 10,000 recoveries confirmed in less than one week, the presidential task force (PTF) on COVID-19 says it is too early to celebrate because there has been reduced testing as a result of the Sallah break.

Boss Mustapha, chairman of the PTF and secretary to the government of the federation, disclosed the reason for the plummet in the figure of new COVID-19 cases while speaking with journalists on Wednesday.

On August 4, the Nigeria Centre for Disease Control (NCDC) confirmed more than 10,000 new recoveries, increasing the tally to over 30,000 patients discharged.

However, while responding to a question on if the recent significant increase in recoveries was a sign of the curve flattening, Mustapha said it is too early to tell, and as soon as activities pick up fully, testing will increase.

“If you noticed, as we celebrated those discharges, there’s also been a decrease in the testings. In the last couple of days we tested just barely 2,000 across the nation, but we have a testing capacity of much more thousands than 2,000,” he said.

“Another reason; everybody is still in the Sallah mood, even the essential workers. Remember when I talked of fatigue? This is part of it. We’ve been doing this thing for the last three to four months. It gets to a point when you want to lay back and say we are already overcoming this, but I know that in the next couple of days, the testing will be rampant because people would have come out of the Sallah celebrations and come back to work.

“The subnationals and local governments will begin to go into the communities to search, because this is the point at which you have to go into the local communities and begin to search. If you don’t do that, so much is happening as a result of the community transmission that has been cascaded into the local communities, that if you wait for it to present itself, it will present itself in a very explosive manner and we can get into a panic mode.

“We don’t want to have that. That is why we are encouraging the state governments to go into the local communities to ensure that they search for those infected with this virus, test them, and if they are positive, isolate them and provide care for them.”

The number of new cases has decreased steadily in the past few days, dropping to as low as 288 new infections on August 3, 2020 — the lowest figure in two months.

However, by August 5, the cases appeared to be on the rise again, increasing to 457 new infections.

The PTF is expected to announce new COVID-19 protocol approved by the president at the media briefing on Thursday.