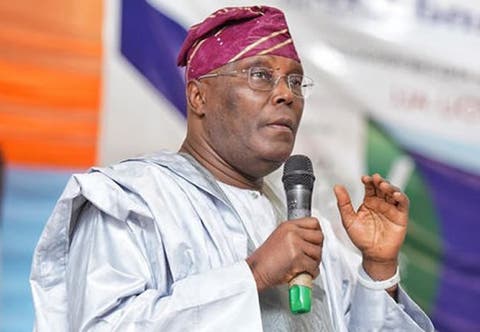 Former Vice-President Atiku Abubakar says the crisis in Edo State caused by the feud between Governor Godwin Obaseki and his predecessor, Adams Oshiomhole, poses a threat to next month’s governorship election in the state.
Atiku, who was the Presidential candidate of the Peoples Democratic Party in the last election, said this in a Facebook post on Thursday.
The feud between Oshiomhole and Obaseki reached a climax on Thursday with the closure of the Edo State House of Assembly.
The former Vice-President, however, asked the warring parties to sheathe their swords and let the people of the state decide who they want to govern them.
Atiku wrote, “What is happening in Edo State is a threat to constitutional order nationwide, and I strongly urge belligerent forces to reign in their proxies and abide by the rule of law. As I have previously said, without the rule of law, there will be no rule at all.
“The current goings-on portend grave danger, not only to law and order in that state but to the coming Edo elections.
“The people of Edo State should be allowed to choose who they wish to govern them, and that choice is to be made on September 19, 2020. Pending then, everything legally possible must be done to preserve the status quo.”
The House of Assembly was shut on Thursday amid reports that lawmakers loyal to Oshiomhole were planning to impeach the leadership of the House and subsequently remove Obaseki as governor.
Some men who claimed to be artisans, however, locked the House and removed the roofs, claiming to be refurbishing the building.