EDO 2020: Obaseki not even eligible to contest, says Oshiomhole 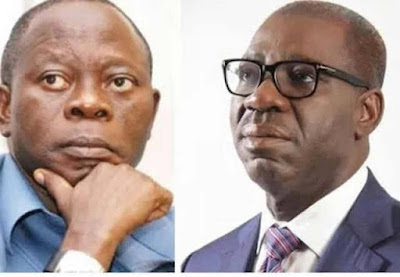 Former National Chairman of the All Progressives Congress APC, Comrade Adams Oshiomhole, has said that Governor Godwin Obaseki does not pose any threat to the APC candidate, Osagie Ize-Iyamu in the forthcoming governorship election.

Addressing the party faithful on Sunday, Oshiomhole said that a Obaseki is not even eligible to contest for the election.

Oshiomhole said that it was a known fact that Ize-Iyamu, the APC candidate, finished from law school, adding that his former classmates have testified to that .

According to the former Governor of Edo State, “Obaseki is not a threat. How can a man who is not eligible for election be a threat?

“I was a governor and I did election and won in 2012 and not one life was lost; none was also lost in my time when he (Obaseki) won.

“Obaseki cannot point to new primary and secondary schools he has built in four years.

“Osagie Ize-Iyamu finished from law school; his former classmates have testified to that. We knew about Gov Obaseki’s credentials after PDP took him to court.”