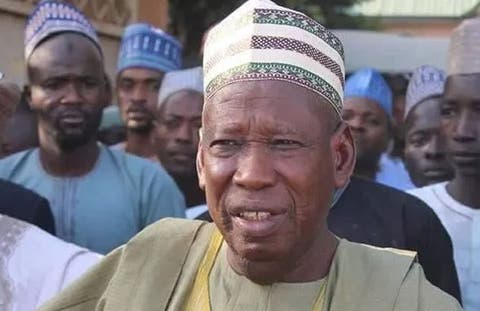 The Kano State Governor, Abdullahi Ganduje, on Friday alleged that his counterpart in Edo State, Godwin Obaseki, has failed woefully.

Ganduje, who is also the leader of the All Progressives Congress national campaign team for the forthcoming governorship election, claimed Obaseki’s abysmal performance will make the election a walkover for the APC.

Ganduje and Obaseki were both members of the APC up until recently when the Edo State governor defected to the Peoples Democratic Party after he was disqualified from contesting the APC ticket.

Pastor Osagie Ize-Iyamu has since emerged the APC candidate while Obaseki clinched the PDP ticket.

Emerging from a meeting with the President, Major General Muhammadu Buhari (retd.), at the Presidential Villa, Abuja on Friday, Ganduje boasted that the incumbency factor will not work for Obaseki.

“But, I assure you that the governor is a liability. In fact, it is even better for us that we are contesting with a serving governor who failed woefully.

“14 members were out of the legislature for 13 good months. When we calculated, we saw those 14 legislators are representing 60 per cent of the population.

“All their constituents are unhappy that elected legislators were not given the chance to participate in the legislations in that state.

“In fact, all the legislations made should be considered as illegal. So, we are ready to fight somebody who has failed and it is an advantage to us.”

Bagudu, who is the chairman of the Progressive Governors Forum, said all members were solidly behind the party in the resolutions that were reached on June 25, which saw the ratification of Ize-Iyamu.

He said, “Since the ratification, all the APC governors have been working in different ways to ensure the success of our party. And let me just remind some of you, this is not different from what we have done before.

“Four years ago, we were in the same Edo State in very difficult election and we supported the incumbent governor then, Adams Oshiomhole to campaign for the party which saw the emergence of Godwin Obaseki as governor. What we are doing today is not different.

“For the Progressive Governors Forum, the defining thing is continuity of All Progressives Congress in governance at the federal and across Nigeria and we will support our party any day.

“Our President has made it very clear about his expectations as to deliver our party in any elections and that is what we are going to do.”