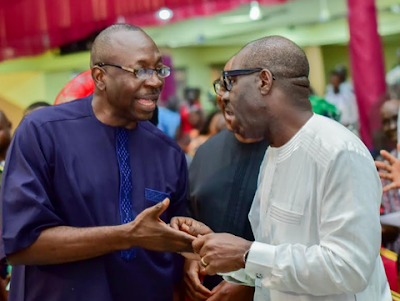 The lawmaker representing Akoko-Edo II constituency, Hon Emmanuel Agbaje has pledged his support for the election of Pastor Osagie Ize-Iyamu of the All Progressives Congress, APC in the September 19th governorship election citing his inability to meet his political obligations to his constituents under the present administration of Governor Godwin Obaseki.

He is the second lawmaker out of the ten that have been sitting since the controversial inauguration of the house in July last year to publicly declare their support for Ize-Iyamu.

Addressing his supporters in Igarra over the weekend, Agbaje said the current system as being operated is strangulating them as lawmakers.

He said: “The only time I can remember that I was a true house of assembly member was the first one year and five months and that was when Comrade Adams Oshiomhole was governor.


“In that one year and five months Adams Oshiomhole approved our constituency projects: I cited one in Ward One, I cited a second one in ward 8 Enwan Mixed Grammar school, I cited one in Ososo Secondary school, they are all there uncompleted.

“Oshiomhole mobilised the contractors with 50 per cent of the value of the contracts and that is where the job has stopped till today.

“Since then, for the past four years we have been begging for those jobs to be completed even when we have not got new ones, is that fair?

“Here we have an opportunity and this opportunity is very simple, it is either we want to continue like this but me I don’t want to end my eight years like this.

“The opportunity is that we get a change, a new system that will now bring out better governance that will benefit all of us so the choice is for our people and I know that we are not foolish.

“They say they did roads in Akoko-Edo, the World Bank did roads for us. We are happy even though the standard of those roads are nothing to write home about because they are almost all being washed away.

“I want to appeal to all of us, I will not stick my neck into projecting this same system that has tied everybody’s hand.”