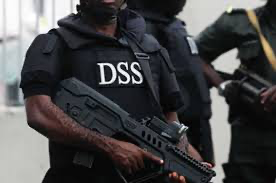 The Department of State Services, DSS, has cautioned politicians attempting to take the laws into their hands.

DSS warned that it won’t allow any Nigerian, irrespective of how highly placed, to take laws into their hands for selfish reasons.

Spokesman of the secret police, Peter Afunanya issued the warning in a statement yesterday.

The secret police vowed to deal with anyone or group that attempts to cause mayhem in Nigeria.

Afunanya urged political stakeholders using political mobilization to cause mayhem in Nigeria to desist from such action.

According to Afunanya: “The Service wishes to warn those, who in the guise of political mobilization and supposed pursuit of group interests, engage in hostile and subversive activities, to desist forthwith from advancing their inimical and parochial causes.

“The Service will not stand idly and watch disgruntled and aggrieved elements take laws into their hands and cause mayhem in the polity.

“In line with its mandate of detecting and preventing threats and crimes against the internal security of Nigeria, the Service hereby reiterates its previous warning that it will henceforth not condone unruly conducts of persons and groups that ought to know better.

“In this regard, it will not hesitate to, within the confines of the law, decisively deal with such persons and/or groups, no matter how highly placed, that may wish to test its resolve.”

DSS also assured Nigerains that it would continue to support the country’s democracy but urged political stakeholders to be responsible.

The secret police urged Nigerians to be “law abiding citizens” as they go about their daily lives.

DSS warning is coming at a time the Edo State Governor, Godwin Obaseki had alleged attack on his convey at Ward 10, Apana, Etsako West Local Government Area of the state.

Ward 10 is where the ex-National Chairman of the All Progressives Congress, APC, Adams Oshiomhole hails from.