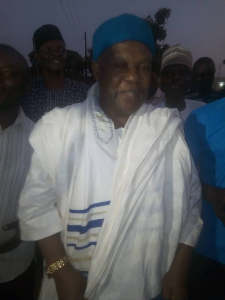 After hours of prolonged questioning, the Department of State Services office in Jos has released former Deputy Governor of the Central Bank of Nigeria, Dr Obadiah Mailafia.

The invitation and interrogation are not unconnected to a recent interview he granted an Abuja radio station, 95.1FM.

Mailafia said his comments about a governor being a commander of Boko Haram remains unchanged.

Mailafia disclosed this to the press on Wednesday evening shortly after his questioning session with the department of state services in Jos, the Plateau State Capital.

Obadiah was at the DSS office around 11 am on Wednesday to respond to questioning over his claims on the recent killings on southern Kaduna and the activities of Boko Haram terrorists in Nigeria.

“….the youth of this country are tired… I thank and appreciate them for their courage… You don’t know what this means… If I had retracted anything I wouldn’t have left this place……. Those killing people in this country are doing evil…. Mailafia said.

Recall that Obadiah told a radio station on Monday that bandits attacking southern Kaduna are working for Boko Haram and are being led by a northern Governor. He also said that the bandits where govern cash and material logistics to wage a civil war in 2022.