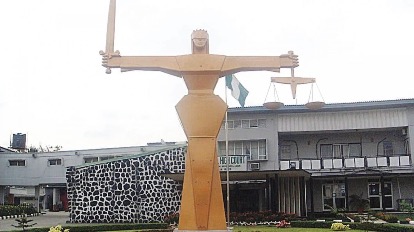 A Magistrate Court sitting in Ibokun, Osun State on Monday has remanded an ex-Police Inspector, Ago Egharevba for unlawfully hitting a 20-year-old fashion designer with the butt of the gun.

The dismissed officer hit Ayomide Taiwo with the butt of the gun over N50 bribe on Tuesday, August 4, 2020.

Ayomide, after six days in coma, gave up the ghost at 08:30am on Sunday, August 9 at the Ladoke Akintola Teaching Hospital (LAUTECH), Osogbo, where he was receiving treatment.

It was gathered that the Nigeria Police Force dismissed Ago over the said alleged crime.

The Prosecutor, Inspector Oladoye Joshua told the court that about 5:00 pm at llahun, Ijebu-ijesha road, Ibokun did unlawfully hit one Ayomide with the butt of the gun on top of a moving motorcycle which made him lose control and fell down and eventually led to his death.

He further alleged that the ex Inspector of Police committed an offence contrary to and punishable under Section 319(1) of the Criminal Code Cap. 34 Vol.Il Laws of Osun State of Nigeria, 2002.

She, however, adjourned the case till October 19.