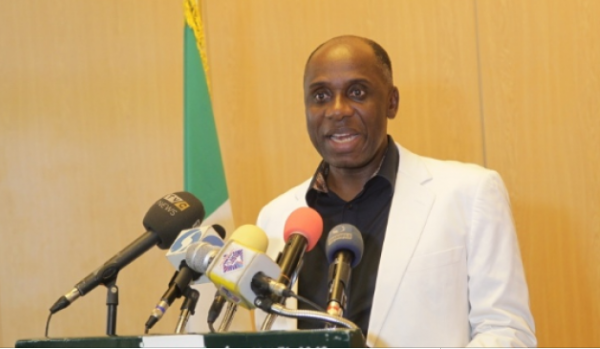 On Monday, it took the intervention of the Speaker of the House of Representatives, Femi Gbajabiamila to quell a rowdy session during the investigation into Chinese loans by the House Committee on Treaties, Protocols and Agreements.

The committee is investigating the alleged non-inclusion of local content in the ongoing Lagos-Ibadan loan project.

The Minister of Transportation, Rotimi Amaechi is currently before the committee.

A mild altercation ensued between the Minister and the Chairman of the Committee, Nicholas Ossai from Delta state.

The Chairman asked Amaechi about the alleged $33 billion loans for infrastructure.

The Minister noted that the transport Ministry is only aware of the $1.6 billion for Lagos-Ibadan and accused the committee of being political.

Following the mild drama, the Speaker appeared and the Committee adjourned the session for 30min and resumed after the break.