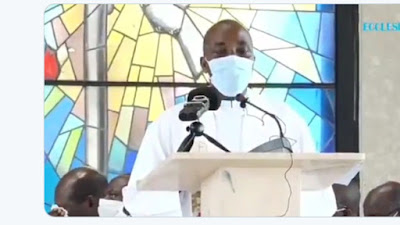 A Catholic Priest, Rev. Fr. Jude, slumped and died on the altar during a Sunday mass in Deido, Cameroon.

The priest, who is also a Spiritual Director of Catholic Men Association (CMA) in Deido, was seen in a viral video preaching the Homily while wearing a face mask before he paused for a moment and slumped.

The former Chairman of National Human Rights Commission and lawyer, Chidi Odinkalu, who shared the video via his Twitter account, said the priest who appeared to be struggling to breath, slumped few seconds after he started preaching the homily.

According to him, other priest rushed to his aid but he couldn’t make it though it wasn’t stated if he had underlying health issues.

He said “Rev. Fr Jude., CMA, Spiritual Director of CMA Deido, in Cameroon’s commercial capital, Douala, was preaching the Homily at Mass earlier today when this happened. RIP to him.”