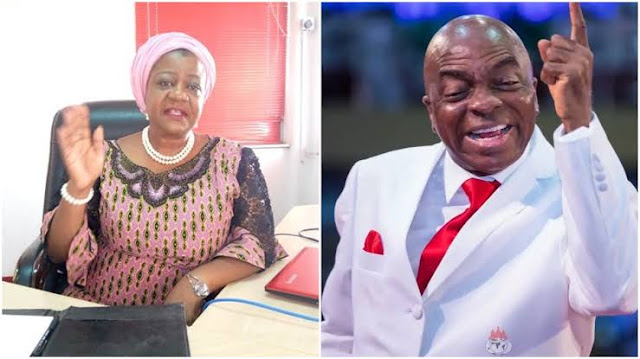 Lauretta Onochie, a media aide of President Muhammadu Buhari has again called out the Presiding Bishop of the Living Faith Church Worldwide, David Oyedepo over the Company and Allied Matters Acts (CAMA).

Onochie on Monday via her official Twitter handle dropped a bombshell allegation against Bishop Oyedepo’s church and Nicholas Mutu, House Committee Chair on Oil and Gas.

The Buhari’s aide, while stressing that “there is a difference between control and regulation” and that “CAMA aims at regulation”, alleged in her tweet that the House Committee Chair on Oil and Gas paid N20 million in a day to Oyedepo’s church.

“Theres a difference between CONTROL & REGULATION

Recall that Onochie had earlier openly criticized Oyedepo for rejecting the CAMA law, saying it is irrational to subject churches to the same laws as companies.

Under CAMA, signed into law on August 7, religious bodies and charity organisations will be strictly regulated by the registrar-general of the Corporate Affairs Commission (CAC) and a supervising minister.

But Oyedepo said the law was borne out of the government’s jealousy about the prosperity recorded by the church.

Reacting in a tweet, Ononchie said Oyedepo would have to abide by the government’s law as long as he dwells in the country.

“I hope this is not true. If it is, Oyedepo will have to manufacture his own country and live by his own laws.

“As long as he lives and operates within the entity called Nigeria, he will live by Nigerian rules and laws. He will do as he’s told by the law. Enough of lawlessness,” she stated.