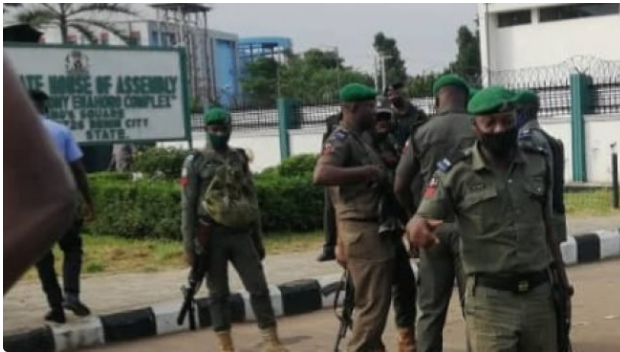 The police in Edo have taken over the house of assembly complex in the state.

Ayoola Ajala, deputy commissioner of police, led a detachment of officers to the assembly on Thursday.

Officials of the Nigeria Security and Civil Defence Corps (NSCDC) were also deployed in the complex.

The police took the action to forestall any attack on assembly.

The development is coming hours after Yekini Idiaye, deputy speaker of the Edo state house of assembly, was impeached.

Idiaye alongside four other lawmakers had endorsed Osagie Ize-Iyamu, the All Progressives Congress (APC) governorship candidate in the state.

The former deputy speaker had said the administration of Godwin Obaseki, Edo governor, did nothing in his village.

“I am from Somorika, in Akoko Edo local government area and my village is the most backward in Akoko Edo,” Idiaye had said when he led his colleagues to the Benin residence of Ize-Iyamu on Monday.