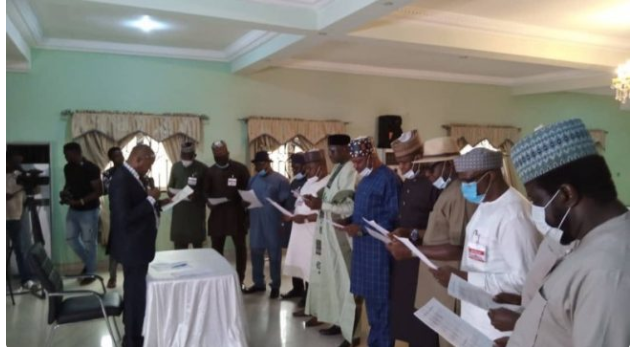 Twelve lawmakers-elect of the Edo state house of assembly have reportedly taken their oath of office.

This comes more than one year after they were elected.The faction has elected Victor Edoror as speaker. Edoror was impeached as deputy speaker in 2018.

The crisis between Godwin Obaseki, the governor, and Adams Oshiomhole, former national chairman of the All Progressives Congress (APC), had split the assembly.

A faction loyal to the governor had been in charge of the assembly while the loyalists of Oshiomhole were left out despite all attempts to be inaugurated.

But as some of the lawmakers in the camp of Obaseki, led by Yekini Idiaye, the deputy speaker, endorsed Osagie Ize-Iyamu, APC candidate for the September 19 gubernatorial election, the pro-Oshiomhole lawmakers relaunched the move for  their inauguration.

A source disclosed that they took their oath of office at a hidden location in the state on Thursday.

The source said they have been mandated to remove Obaseki one month to the governorship election. A claim NigerianEye could not independently verify.

Obaseki had defected from the APC to the Peoples Democratic Party (PDP) after he was screened out of the governorship race of the APC.

The fresh crisis at the state assembly broke out after the impeachment of Idiaye.

Hours after Idiaye’s removal, Frank Okiye, the speaker of the house of assembly, raised the alarm that there was a plot to forcefully take over the assembly.

On Thursday morning, security operatives stormed the assembly, leading to a protest.

Okiye had alleged that the leadership of the APC was behind the action of the security operatives.

He also accused the other faction of the assembly of planning to topple the government of Obaseki.

“The Edo State House of Assembly condemns any attempt to operate the House of Assembly Complex at Ring Road, currently undergoing renovation as the inaugurated members and the Rt. Hon. Speaker have relocated the House via a letter widely circulated to a new address at Dennis Osadebay Avenue,” he said in a statement.

“Forceful entry into the premises amounts to trespass, being that the House members have suspended activities at the building; their action will amount to disturbance of public peace which is also an offense.”