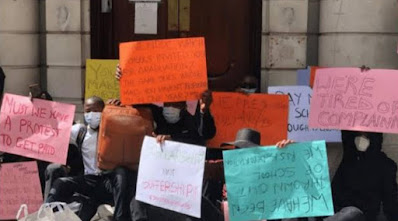 The Niger-Delta Development Commission, NDDC, is yet to implement the presidential directive for the payment of the outstanding allowances of beneficiaries of international scholarship of the Commission.

The Presidency on Friday, August 7, 2020 issued an ultimatum to the NDDC to clear all pending allowances of the students overseas which expires Monday.

But a group under the aegis of Niger-Delta Rights Advocates, NDRA is calling on the Presidency to take an instant action against the management of the NDDC for failing to meet its obligation.

NDRA in a statement by its Spokesman, Darlington Nwauju is demanding the immediate settlement of all outstanding tuition fees and stipends owed the region’s scholars abroad under the NDDC’s foreign scholarship scheme, “who have been thrown to the streets and exposed to all sorts of risks due to the failure of the Commission to meet its obligations to these scholars for 2 years running.”

“Our organization is minded of the universal push to banish illiteracy at all levels and concerns by governments the world over to increase funding in the educational sector.

“We in the NDRA are saddened that Mr President’s lawful directive is yet to be complied with, while on the other hand, scholars from a rich region like the Niger Delta region would be traumatized psychologically and emotionally for no fault of theirs because the region’s interventionist Agency is drawn in the web of self-inflicted grotesque, unbridled corruption and gluttonous acquisition.

“The NDRA is mindful of an unambiguous Presidential directive to the Commission’s management led by Prof Kema Daniel Pondei, to clear this national embarrassment.

“We, however, note with regrets that this lawful presidential directive has as at today (August 17 2020), not been implemented.

“For the avoidance of doubt, we want to opine that Presidential directives are the mechanisms through which the President prescribes the conduct of business in the Executive branch and it carries the force of law. By this directive, the President has declared the plight of these youngsters as an emergency!

“The NDRA further invites the public to pay attention to Part VI (Miscellaneous) of the NDDC Establishment Act 2000, specifically Section 23 which empowers the President & C-in-C of the Armed Forces to, “issue directive of a general nature or relating generally to matters of policy with regard to the performance by the Commission of its functions and it SHALL be the duty of the Commission to comply with the directive”.