BBNaija: Shut up your mouth -Ozo rages at Prince (VIDEO) 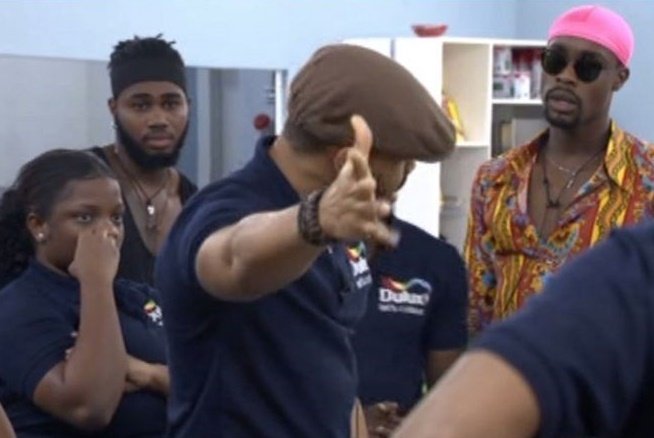 The ongoing Big Brother Naija (BBNaija) reality TV show has lived up to expectations when it comes to dramas with Day 17 having its share of controversies as well as deep conversations.

Ozoemena ‘Ozo’ Chukwu, the current head of house (HoH), shocked many when he yelled at Nelson Enwerem Prince during a practice session ahead of Thursday’s wager game.

Ozo had maintained a relatively simple personality since the show commenced, a virtue that has made many housemates and fans alike to admire him.

He, however, left tongues wagging after losing his cool with Prince during the practice session. While the session lasted, the housemates were given a short break to relax, before continuing.

Prince had, however, stayed put on his seat while the remaining housemates went for the break.

When they eventually regrouped, Prince stood up and consequently headed for the restroom without taking permission from other housemates as required.

The development had angered Ozo and some other housemates, who wondered why he neither went for the break earlier nor took permission before leaving other members of the house.

“I won’t tolerate this nonsense. Everyone left her and you were sitting down here. Now everyone is back and you stood up to leave….” he could be heard shouting at Prince.

He was also heard yelling at other housemates who tried weighing into the matter.

“Shut up your mouth… everyone was here, those who left afterward even took permission,” he bellowed at some housemates trying to calm him down.

He had consequently demanded an open apology from Prince to the housemates, a directive the latter heeded.

Ozo would also later apologise to Prince and the group, noting that his anger was borne out of his desire to ensure they perform better in Thursday’s wager game following their dismal output in previous ones.