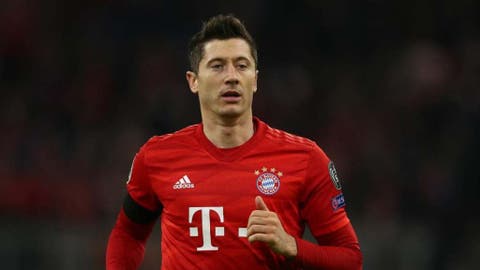 Bayern took a 3-0 lead into Saturday’s second leg after a thumping win in February’s reverse fixture and completed the job in style to set up a quarter-final with Barcelona in Lisbon on Friday.

Lewandowski opened the scoring from the penalty spot and rounded things off late on with his 53rd goal of the season after setting up Ivan Perisic and substitute Corentin Tolisso.

Tammy Abraham had pulled one back for Chelsea but treble-chasing Bayern – who lost Jerome Boateng to an apparent knee injury – became the first side ever to put seven past the Blues in a two-legged European tie.

Without a number of first-team players through injury and suspension, Chelsea’s task was made even tougher when Lewandowski tucked in a penalty he won after being felled by Willy Caballero – a VAR check showing the striker was onside beforehand.

Having brought up his 25th goal in 20 home outings this season, Lewandowski turned provider after Mateo Kovacic was caught in possession by slotting in Perisic to fire past Caballero.

Former Bayern target Callum Hudson-Odoi had a goal ruled out by VAR for offside but Chelsea did have a consolation before half-time – Abraham tapping in from close range after Manuel Neuer parried Emerson Palmieri’s low delivery into his path.

Thomas Muller wasted a glorious chance to restore the five-goal aggregate advantage when diverting over from close range, three minutes before Boateng hobbled off injured.

But Chelsea, on their first visit to this ground since their famous final triumph in 2012, conceded twice more in the final 14 minutes – Lewandowski crossing for Tolisso to volley past Caballero, before rounding off the rout with a powerful header.