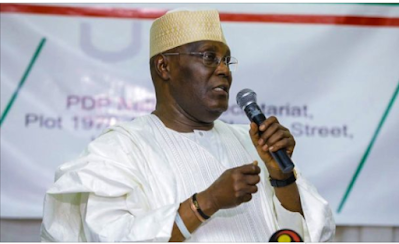 Former Vice-President Atiku Abubakar has asked the national assembly to reject the approval of any new loan request meant for “projects that are not viable”.

In a letter to Ahmad Lawan, Abubakar urged the federal lawmakers to also halt approval for loans that are not income-generating or production-based.

He said Nigeria risks insolvency if it continues to borrow money, alleging that previous funds borrowed were used for things that are not viable.

According to the Debt Management Office (DMO), Nigeria’s total public debt as of March 2020 stood at $79.3 billion, while external debt was $27.6 billion.

Amid concerns of Nigeria’s rising debt, Lawan had said in June that federal lawmakers approved about $28 billion loan requests of President Muhammadu Buhari in the last one year.

In the letter, received on August 25, Abubakar, who was a presidential candidate in 2019, said Nigerians cannot sit back and watch “while our nation teeters towards financial peril.”

“A further cause for concern is the fact that not all of these debts are necessary. A study of the use to which these monies have been put to will show that much of it has gone towards items or project that are non-productive or viable.”

The former vice-president added that the future of Nigeria’s youth and unborn generations has been “placed in what could very well be bondage-like conditions.”

“As such, in view of your role as a check on the excesses of other arms of government, may I suggest that going forward, the National Assembly should refuse to approve any new loan requests, where such loans are to be spent on projects or items that are not income-generating or production-based, or indeed viable,” he said.