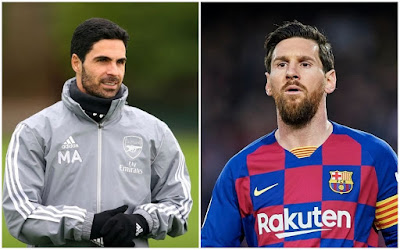 Messi has told Barcelona that he wants to leave this summer and wants to trigger a clause in his contract which will see him become a free agent.

The 33-year-old has since been linked with a move to Manchester City, where he could reunite with Pep Guardiola, who he played under for four years at the Camp Nou.

Arteta, who was Guardiola’s assistant until December 2019, says it would be a pleasure to have Messi in the Premier League.

“Let’s see what happens and if he comes to England, we are all going to enjoy it.

“It doesn’t matter if it’s against Arsenal. It’s good for football.

“If it’s not there we might find him in the Champions League,” Arteta told a press conference on Thursday.