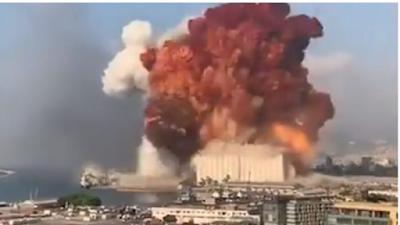 At least 10 persons have been killed while many sustained injuries in a massive explosion that rocked Beirut, capital of Lebanon, on Tuesday.

The state-owned national news agency traced the source of the explosion to a warehouse of firecrackers near the port in Beirut.

Many cars and buildings got damaged in the incident.

Some residents said the explosion sounded like an earthquake as the grounds shook and a large flame filled the air.

“I saw a fireball and smoke billowing over Beirut. People were screaming and running, bleeding. Balconies were blown off buildings. Glass in high-rise buildings shattered and fell to the street,” Reuters quoted a witness to have said.

🇱🇧 This was the biggest explosion in Lebanese history. (And Lebanon has witnessed hundreds of huge explosions!)

⁦@LamiaMoubayed⁩ and I miraculously emerged unscathed as we were going down the stairs to reach the underground parking lot at USJ on rue Huvelin, pretty close🙏 pic.twitter.com/el9QW3SJWg
— Karim Emile Bitar (@karimbitar) August 4, 2020

The explosion happened ahead of the verdict in the trial over the killing of Rafik Hariri, former Lebanon prime minister, by car bomb on February 14, 2005.

A UN tribunal is set to issue its verdict in the trial involving four suspects in the murder case.

The four suspects are members of the Iranian-backed Hezbollah group, a Shiite Muslim political party and militant group based in Lebanon.

Hariri was travelling in a motorcade when the explosion went off in a busy area in the state, causing great damage to lives and properties.

Before his assassination, the ex-PM joined calls for Syria to withdraw troops which had been in Lebanon since 1976.

Following his death and investigations conducted by the UN, the four suspects were charged with terrorism, murder and attempted murder.