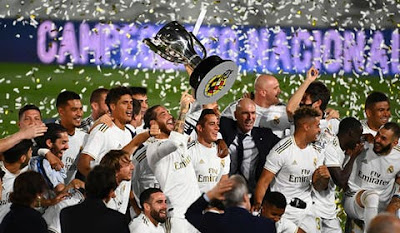 Real Madrid were crowned La Liga champions for the 34th time on Thursday after Karim Benzema scored twice in a 2-1 victory over Villarreal which clinched the title with one game to spare.
‌
Real Madrid president Florentino Perez described Zinedine Zidane as a “blessing from heaven” after he delivered the club their 34th La Liga title on Thursday.

Perez also said he believes Sergio Ramos will end his career at Madrid, despite uncertainty over the 34-year-old’s future, with his contract due to expire next year.

Madrid defeated Villarreal 2-1 at the empty Alfredo di Stefano Stadium to secure the victory they needed to clinch the title from Barcelona with one game left to play.


The trophy is Zidane’s 11th after 209 games in charge of Real Madrid.

“He has won a trophy every 19 games,” said Perez. “He is a blessing from heaven and hopefully he will be with us for a long time. People can criticise him as much as they want as long as he continues to win titles.”

On Ramos, Perez said: “I am sure Ramos will end his career at Madrid. Everyone should stay calm. He is more than a captain to us, he has led the team with enormous character.”

Ramos said he would like to retire with the newly-crowned Spanish champions. “Whatever the president wants,” he said.

“It doesn’t depend on me, I’m really happy here, everyone knows that and I’d like to end my career here.

“I’m happy and calm, I don’t think there will be any problems on my side or from the club, let’s hope I can retire here.”

Ramos has scored five goals since the restart as Madrid won 10 games out of 10 to put Barcelona out of sight.

“I’m not too expressive,” Zidane said. “But inside, I am very happy. I always told you the league wasn’t yet won but today it is, so you can see my most beautiful smile. Today we can be happy.”

Zidane has now won La Liga twice as a coach, adding another title to the one Madrid secured under him in 2017.

“The first one was phenomenal but this one has a particular flavour,” he said. “After two months at home, we returned, we prepared ourselves in a different way. And we won a league, which is the most difficult thing to win. It comes from a lot of sacrifice.”