Yoruba leaders to Nigerian Army: No harm must befall Adeniyi in custody 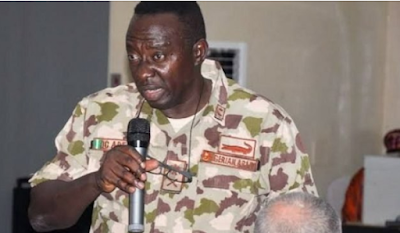 Some Yoruba leaders have asked the army authorities to ensure that Olusegun Adeniyi, former theatre commander of Operation Lafiya Dole, is safe in custody.

There are reports that Adeniyi, a major-general, is to face a court-martial.

A court martial is a legal proceeding for military officers. It is similar to a civilian court trial.

Adeniyi was all over the news in March when a video where he complained of the lack of weapons for troops fighting Boko Haram insurgents went viral.

After the video, he was removed as commander of Operation Lafiya Dole and transferred to the Nigerian Army Resource Centre in Abuja.

He was later moved to the Army Headquarters, still in Abuja.

Others who attended the meeting are Oye Ibidapo-Obe, former vice-chancellor of the University of Lagos; Yinka Odumakin, spokesman of Afenifefre; and Gani Adams, a leader of the O’dua Peoples Congress (OPC).

The leaders said the plight of soldiers on the battlefront is well known, adding that no one should be punished for speaking the truth.

They also demanded an investigation into the death of Tolulope Arotile, Nigeria’s first female helicopter pilot, who died in a freak accident earlier in the month.

The leaders called on the federal government to constitute an independent panel of inquiry to look into the death of Arotile, alleging that there is more to the death of the late Arotile than being reported.

“We are also aware of the initial casual manner Tolulope Arotile’s killing was treated by the authorities of the Nigerian Air Force which is capable of raising suspicion in the minds people. It is better to quickly douse tension and apprehension by coming out in the open,” they said in a communique issued at the end of the meeting.

“The authorities did not imagine that so much noise would be made, and so many questions would be asked. Her death was treated with levity, just as many other cases where the lives of Nigerians do not seem to matter anymore.

“The Yorùbá nation therefore demands a full-scale independent investigation by an inclusive panel of experts. The Yorùbá nation notes with sadness that on the very day our daughter Tolulope went home, a senior Military officer: Major General Olusegun Adeniyi was court-martialled for daring to voice out the lack of tools and equipment needed to prosecute a Boko Haram war that has become far too prolonged and far too controversial in light of the numerous calls to the Federal Government to change the Military ’Service Chiefs who have failed to provide the highest quality of security, leadership and delivery of forthrightness in their duties.

“We the Yorùbá condemn in strong terms, the cherry-picking of our fighters, soldiers, officers as either cannon fodders easy-targets, operational fall-guys and being used for experimental disciplinary measures, whilst the real culprits, go free!

“Critical to this development are also pieces of news items of friendly fire from soldiers of a particular part of the country using their guns on our fighters who dare carry the battle deep into the Boko Haram held territories.”

The Yoruba leaders also demanded the restructuring of the country ahead of the 2023 general election.

“We the Yorùbá Nation therefore reject the holding of a future general election before Restructuring Nigeria fiscally and structurally. We state that the ship of state is veering off precariously into a precipice, and that Nigeria is at the very edge of a political subsidence,” the communique read.

“We are persuaded that nothing short of Restructuring can save this country. Any attempt to go ahead with elections in 2023 without addressing the issue of Restructuring would spell doom for Nigeria.

“Notwithstanding the interests of some elements in our midst, it would be presumptuous to assume that the masses of the educated Yoruba Nation will dive headlong into being part of the 2023 elections, when all elements of its execution – the military, paramilitary, INEC, the judiciary have been rigged and appropriated by a single very tiny minority ethnic group in a small corner of the country.

“The emerging resolve of the Yoruba not to be part of vassal state that Nigeria has become, is better managed with due accommodation before any further degeneration and obvious consequences. Our quest shall henceforth be to mobilise the masses of our peoples not to participate in any further elections until the goal of Restructuring or Self-determination is attained.

“The Yoruba Nation is therefore making the clarion call for confidence building steps to taken by the Buhari regime immediately, especially as the historic 60th Anniversary of Nigeria as an independent Nation beckons on October 1, 2020.

“Steps towards an urgent meeting of all Nationalities has to be taken now to determine the nature of our relationships. Unless this peaceful step is heeded to, so that Nigeria heads in the right direction thereafter, the clear alternative would be for self-determination quests to proceed rapidly without any further restraint.”