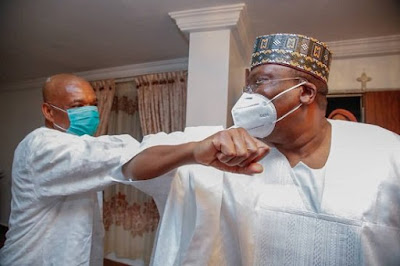 Senate President, Ahmad Lawan, has said that Sen. Orji Uzor Kalu’s seat in the Senate was not declared vacant because it was the right thing to do.

Lawan made the comment on Tuesday when he received some leaders of thought from Abia.

Kalu was the Senate Chief Whip when a Lagos court sentenced him to 12 years imprisonment in December 2019.

But Kalu, a former Abia governor, was released after a Supreme Court judgment.


Lawan stated that no one could convince the lawmakers that somebody should take the Abia North seat.

The leader of the legislature reminded that Kalu was on several appeals until he exhausted all the opportunities available to him.

Lawan noted that the Red Chamber “did not even appoint an acting Chief Whip. The Deputy Chief Whip continued to play that role until he (Kalu) was released”.

He recalled that the Senate was under pressure, but thought the right thing to do was to keep the seat and portfolio until Kalu was able to get judgment.

Lawan stressed that it would have been “premature, unjust and unfair to declare his seat vacant or his position to be given away because he was in that situation”.

The Senate President insisted that they did not do anything extra-ordinary.