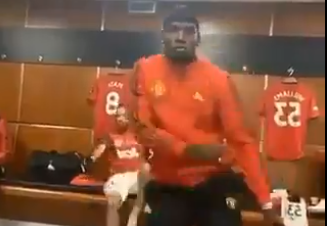 A video of Paul Pogba, French footballer signed to Manchester United football club, dancing to a song by Wizkid has surfaced online — and is trending.

The video showed the French player dancing to Soco, a 2018 song by Wizkid, being played by his teammate, Jude Ighalo, a former Super Eagles striker.

Ighalo who doubled as the cameraman captured the moment.

A few teammates can also be seen discussing as the camera swiftly shifts focus to Pogba who then proceeds to deliver some exquisite dance moves.


In February, Ighalo revealed in an interview with Manchester United Official website how his mother cried when she learnt his deal to the Manchester club had been finalised.

Ighalo joined Manchester United on a six-month loan from Shanghai Shenhua. He is the first Nigerian player to star for the United top team.