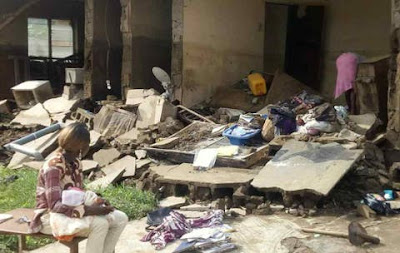 Several residents of Ibadan, the capital city of Oyo State were rendered homeless when their areas were flooded during a downpour that lasted many hours on Tuesday.

Except for the casualty figure that was minimal, the flooding was similar to the deadly one that happened in 2011.

Though two riders on motorcycles were said to have been swept away, it could not yet be confirmed as of the time of filing this story.

The heavy rain which started at about 3.30 pm did not stop till late in the evening.


At Olodo area, some people were reportedly trapped as the raging flood entered their homes. They were heard calling for help in a recorded video.

Also affected were areas like  Oke-Ado, Gbekuba, Apata, and Omi-Adio.

At Omi Adio, farmlands and fish-ponds were submerged.

Earlier, the state government had dredged some rivers and streams in preparation for the heavy rains.

One of the affected residents at Olodo said, “The rain started drizzling until it became heavier and continued for many hours. There are no casualties here yet, but we don’t know what will happen when the large volume of water flows away”.

”All of our property including electrical appliances, furniture, food items, clothes, were swept away. ”

“We saw some animals floating on water. We heard also that some parts of Ososami and other areas were submerged”.