Those who swallowed NDDC funds must cough it out, Akpabio warns 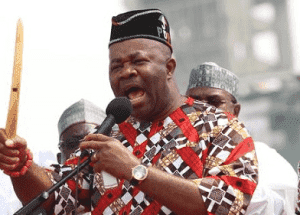 Those who used their positions to loot funds meant for the development of the Niger Delta must cough them out no matter how powerful they are, Minister of Niger Delta, Chief Godswill Akpabio, has warned.

Akpabio said that the era in which powerful and influential elements teamed up with staff at the NDDC to make away with cash meant for the development of the region was over and it was time to deploy whatever is available to work for the overall well being of the people of the troubled region.

“We want to see major roads and bridges connecting major towns and villages and centres of development emerging across the nine states of the Niger Delta so that people can breathe a new lease of life,” Akpabio said.

The Minister said that those who doubted the forensic audit ordered by President Muhammadu Buhari have now realised it was real and already working leading to the return of cash and materials earlier looted away by powerful elements who believed they were untouchable.


Akpabio said: “I am not satisfied with what is happening in the Niger Delta because the money that is coming to the NDDC is being hijacked by some people who do not want the money to provide any form of succour to the larger society. We need a change so that we can use available money to complete the East-West Road before December, do some specialist hospital that can provide holistic health care for the people and create jobs for the people.

“I want to see a new NDDC with a good balance sheet because for 19 years we lost everything to powerful forces who used the NDDC money to buy limousines for themselves and families leaving the poor people to continue in their squalor.

“For this reason, the forensic audit will show who got what and who did what with the money they received and I can assure you that all those who swallowed NDDC money will cough it out no matter how powerful and connected they are. It has already led to the recovery of money and houses which were stolen before we came to the scene.

“The audit is meant to reposition the NDDC and not to witch-hunt anyone. I have not given out contracts except the appointment of the forensic experts and coved19 tests and equipment for the states. We assisted the governors financially to set up facilities for coved 19.

“We have blocked all loopholes and all money of NDDC is now in CBN and not scattered in banks at home and abroad as before,” Akpabio boasted.