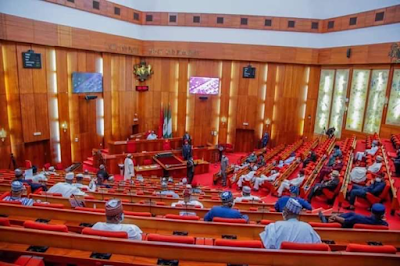 The Senate on Wednesday urged the Federal Government to urgently raise the age limit usually attached to job vacancies in the country.

The call by the Senate followed its consideration of a motion titled: “Urgent need to review age barrier during recruitment and employment” sponsored by Senator Ibrahim Gobir (Sokoto East).

Citing order 42 and 52 of the Senate Standing Rules, Gobir noted that recruitment requirements of Federal Government Ministries, Department and Agencies (MDAs) and other private bodies which set age barriers “inadvertently excludes and marginalizes skillful and competent prospective applicants from participating in such exercises.

“Due to the high unemployment rate in the country, many graduates spend up to 10 years seeking employment and this puts them in a disadvantaged position by no fault of theirs.


“Many individuals resort to falsifying their age all in a bid to fall within the required age limit for them to be gainfully employed.

“This development, where a person believes he is unemployable can lead them to embracing criminal activities and further increase the growing crime rate and
insecurity in the country.”

Gobir called on the Senate to “urge the Federal Government to direct the Ministry of Labour, Employment and Productivity to set up a committee to review the age limit for employment or recruitment with a view to get this problem of age barrier sorted out to allow the teeming skilled and competent Nigerians to be employed by Ministries, Department and Agencies (MDAs).”

In his contribution, Senator Bala Ibn Na’Allah (Kebbi South), said the Senate can only progress on the call for review of age limit by first calling for the lifting of the embargo placed employment over thirteen years ago by the Federal Government.

According to him, the embargo period must be factored into the review of age limit for job recruitment by the Ministry of Labour and Productivity for prospective job seekers in the country.

Na’Allah said: “I think the motion is apt and timely. The major basis for the Senate to proceed on that request lies in the fact that, as an institution, we must take notice that the federal government on its own placed embargo on employment for over 13 years now.

“The period that there have been embargo by the Federal Government in itself should be considered in the review of age limit.

“There cannot be justification for you to place embargo on employment, then at the same time expect graduates to remain at the age they were during the period of the embargo.

“I think in the review, that has to be taken into account, and therefore, the age limit can now be raised in addition to the established age. That should be the legal verdict for the review.”

The Senate President, Ahmad Lawan, in his remarks lamented the discrimination against job seekers as a result of the barrier imposed by often prescribed age limit.

“It is not through a fault of theirs that people are discriminated against. They’ll tell you only 30 years limit, meanwhile someone graduated 10 years ago.

“This is a very good motion urging the Ministry of Labour and Productivity to swing into action immediately,” Lawan said.

Senators unanimously approved the only prayer of the motion when it was put to voice vote by the Senate President.