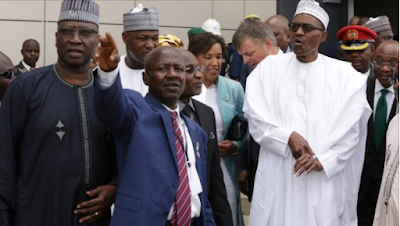 Unknown to Ibrahim Magu, President Muhammadu Buhari had directed the Department of State Services (DSS) to investigate him as far back as 2018.

TheCable reports that the DSS, which has a financial crimes unit, played the central role in unearthing the allegations for which the suspended acting chairman of the Economic and Financial Crimes Commission (EFCC) is now facing a presidential probe.

The president was said to have been shocked when the DSS provided a comprehensive dossier on Magu which was “damning”.

“If Magu was a man who can read the signs, he should have asked himself why the president did not re-present his name to the senate for confirmation as EFCC chairman since the new national assembly was inaugurated,” a senior presidential source revealed.

The current senate has never turned down any nominee of the president, unlike the previous one which refused to confirm Magu.

However, it would appear Magu eventually got wind of the moves against him as he tried to ingratiate himself with the president.

“President Buhari prefers to pray with his family and personal aides, so he was not happy when Magu wangled his way to the mosque after the partial lifting of lockdown.

“An instruction was then issued that he should not be allowed to come to the mosque.”

The trigger for the DSS investigation, according to the source, was the report of the presidential committee on audit of recovered assets.

The committee was headed by Olufemi Lijadu, with Mohammad Nami and Gloria Bibigha as members.

Bibigha works in the office of the auditor-general of the federation.

The committee submitted its report six months behind schedule because of the extent of the work, and the aspect on EFCC “took the president by surprise”.

“These inconsistencies cast a serious doubt on the accuracy of figures submitted by the EFCC. It is the committee’s view that the EFCC cannot be said to have fully accounted for cash recoveries made by it,” the report noted.

NFIU, the central national agency that handles disclosures and intelligence in the financial sector, used to be under the EFCC but was excised and made an independent body in July 2018 despite Magu’s opposition.