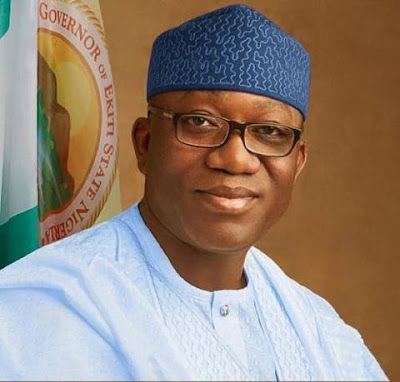 The factional Chairman of the All Progressives Congress (APC) in Ondo State, Mr Henry Olatuja, has urged the national leaders of the party to warn the Chairman of Nigerian Governors’ Forum, Dr Kayode Fayemi, to steer clear of the state’s politics.

Olatuja stated this on Tuesday in Akure at a news conference, organised by the party over the mode of primary being considered for picking the APC standard-bearer in the state.

He claimed that Fayemi, the Governor of Ekiti, was trying to impose his ‘friend’, the incumbent governor, Oluwarotimi Akeredolu, on the party faithful in the state by pushing for indirect governorship primary.

The primary election of the APC has been scheduled for July 20.


“We need to call the attention of national leaders of our party to call the Governor of Ekiti, Dr Kayode Fayemi, to order to avoid disgrace and embarrassment that may arise from abuse of his office as Chairman, Nigeria Governors’ Forum.

“He should desist from facilitating undemocratic process while trying to impose the incumbent governor, Rotimi Akeredolu on the APC by pushing for an indirect primary.

“The indirect primary is grossly inequitable and inimical to the success of our party in the general election coming up on Oct. 10.

“He should note that Ondo State is not an appendage of Ekiti, and as such, he should stop meddling in the political affairs of our state,” he said.

Olatuja further claimed that out of the 12 aspirants contesting for the APC governorship ticket, nine were working with their own faction of the party.

“It is, therefore, unthinkable and unspeakable that the list of party members submitted to assist the APC national committee coming to conduct the primary election in various ward and local governments was unilaterally compiled and submitted by the Ade Adetimehin group.

“This was without the input of our executive committee and other aspirants.

“We demand that the list in contention be discountenanced in the spirit of equity, fairness and justice,” he said.

Olatuja said that the party was not unmindful of the coronavirus pandemic, but with strict adherence to the laid down procedures by the NCDC and INEC to achieve direct mode of primary for the choice of the party’s governorship candidate.

He, however, pledged his executives’ full support for and loyalty to the new leadership of the party under Gov. Mai Bala Buni of Yobe and prayed for successful discharge of the national assignment.