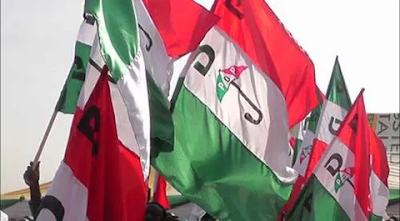 Some members of the Peoples Democratic Party in Ondo State on Monday held a protest against the alleged doctoring of the delegates’ list ahead of the party’s July 22-23, 2020 governorship primary.

This is coming three days after party members held a similar protest on the same issue, at the venue of the PDP Ward Congress Electoral Committee meeting, in Akure.

The protesters who gathered at the Ondo State PDP secretariat, in Akure, alleged that the manipulation of the delegates’ list was being sponsored by the Deputy Governor, Mr. Agboola Ajayi.

The aggrieved PDP stalwarts further alleged that the names of over 101 fake delegates were smuggled into the PDP ad hoc delegates’ list.


The protesters, led by Solomon Bitire, who is also a former local council chairman, called for the arrest of the electoral committee secretary, Mr. Kingsley Chinda, for being an accomplice.

In his reaction, the Chief Press Secretary to the Deputy Governor, Mr. Tope Okeowo exonerated his boss, saying the allegations were aimed at maligning his principal.

Okeowo said, “The deputy governor is not a desperate politician, he is a lawyer and knows the rules of the game, the allegation of the protesters is nothing but falsehood against the person of the deputy governor. I can tell you it is not true.”