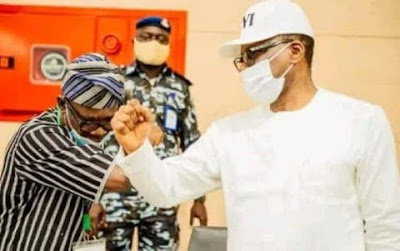 Deputy Governor of Ondo State Hon Agboola Ajayi, who lost the governorship primary of the Peoples Democratic Party, PDP, has accepted defeat saying that he contested many forces in the election.

The 2016 governorship candidate of the PDP, Eyitayo Jegede defeated Ajayi in a keenly contested election polling 888 to Ajayi 657 votes.

Reacting to the outcome of the poll, Allen Sowore, the Media Adviser to Ajayi said in a statement that  “the people have spoken, and we accept the outcome in good faith, knowing fully well that it was a race against different forces.

The statement was entitled: “We fought a good fight”.


It reads “Following the outcome of the Primary election of our party, the People’s Democratic Party (PDP), held on 22nd July 2020, where Eyitayo Jegede, SAN, was elected winner, we wish to thank the good people of Ondo State for standing with us in the struggle to liberate our State.

”The people have spoken, and we accept the outcome in good faith, knowing fully well that it was a race against different forces.

“We remain undaunted and resolute about our commitment to a people-oriented government against personalised democracy.

“We wish the good people of Ondo State and the winner the best as we March on. For us, life goes on.

Meanwhile, announcing the result last night, the chairman of the Primary Election Committee and Enugu State governor, Ifeanyi Ugwanyi declared  Jegede the winner of the contest.

With this development, Jegede will again face Governor Rotimi Akeredolu at the poll.