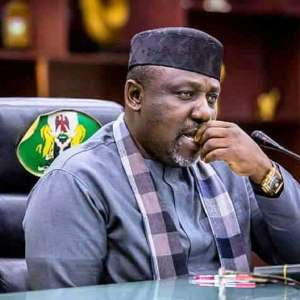 Members of the seven panels set up by Imo State Government, to critically look into specific activities of the state government, between 2011 and 2019, have been dragged to the Federal High Court, Abuja, by Senator Rochas Okorocha.

Also included in the suit, which is marked FHC/ABJ/CS/508/2020, are the Economic and Financial Crimes Commission, EFCC, and the Attorney General of Imo State, and eight members of the Judicial Commission of Inquiry on Contracts.


Already, the Registrar of the Judicial Commission of Inquiry on Contracts, Mr. Emmanuel A. Obi, has been subpoenaed “to produce the testimony of Zigreat Co. Limited, before the Contract Award Tribunal, as represented by Cyracus Duru”.

However, Obi has replied to the subpoena, through Okorocha’s counsel, C. A. N. Osondu, informing the Court that “from the records available in the Secretariat of this Commission, the record sought to be produced, does not exist.”

Meanwhile, the former Cashier in the Accountant General’s Office, Dr. Ethelbert Ojiaku, yesterday, in JUD/CICA/119M/2020, told the Commission that the releases he made to the Director of Accounts, Government House, were not tied to specific projects or contractors.

“Vouchers for contracts were domiciled in the Pay Office. I released funds without knowing who the beneficiaries were, and at all times, the Principal Secretary sent in all the approvals”, Ojiaku said.