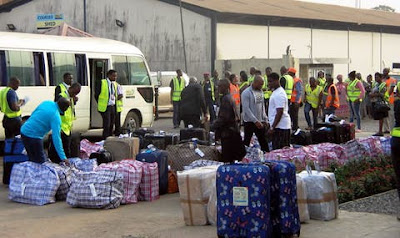 The Founder of Napier Consulting Services, Roy Napier, has lamented the rate of exploitation of young Nigerians who travelled to Europe for greener pastures only to have their hope dashed.

Napier said in his travels around the world, he discovered that many youths were ill-informed on the conditions they would meet in many developed countries.

The consultant spoke in Lagos on Thursday during a walk to commemorate the World Day Against Human Trafficking.


Personnel of the National Agency for the Prohibition of Trafficking in Persons and other related offences were joined by men of the Nigeria Police Force on the walk, which also included a non-governmental organisation, Live Abundantly, among others.

The groups moved round some parts of the Ikeja area as they sang, distributed fliers and spoke against human trafficking.

Napier said that although he grew up in the UK, he had been visiting Nigeria since 1995.

“I remember being in Spain on vacation and there I saw an entire Nigerian community; huge numbers of Nigerian people on the streets of Spain, selling all the things you buy on the side of the streets; the silly things for tourists.

“I have seen what happens to Nigerians who travel to Europe. I can absolutely confirm that it is worse than here. Nigeria and Africa have enormous opportunities for expansion, trade, business and for entrepreneurs. It is far better and you are likely to become a successful business person in Nigeria than in Europe.”

The Founder and Executive Director of Live Abundantly, Dr Ama Onyerima, said in Nigeria, 70 per cent of women and children were vulnerable to human trafficking, hence the need to take a stand.

“Human trafficking must start to be addressed in schools and in the communities to create greater awareness because it is an epidemic on its own,” she added.

The Zonal Commander of NAPTIP, Lagos, Daniel Atokolo, said human trafficking was a modern day slavery, urging Nigerians to take a stand against traffickers, trade in human parts and organs, baby factory and sale of babies.