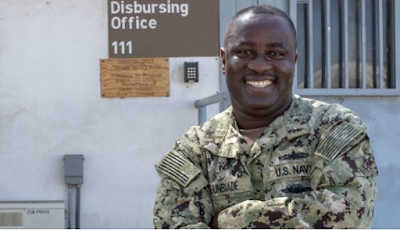 When Victor Agunbiade was called to serve as the officer in charge of dispersing and money collection for the entire African region at the US navy Camp Lemonnier in Djibouti, in October 2019, little did the Nigerian-born officer  know that the assignment was preparing him up for yet another feat that would bring him global recognition.

As a navy reserve supply officer, he had been serving at Camp Lemonnier — the primary base of operations for the US Africa command in the Horn of Africa and the only permanent US military base in Africa — until his latest role that saw him successfully manage the US navy’s largest cash disbursement office that involved $45 million.

In recognition of his feat and for also maintaining “100 percent accountability of $23 million across six rigorous inspections and independent audits with zero discrepancies”, the US navy recently honoured Agunbiade with a navy and marine corps commendation medal.

Kenneth Crowe, US Navy commanding officer, Camp Lemonnier,  presented him with a gold star certificate for his “meritorious service while serving as disbursing officer.”

But Agunbiade’s rise to stardom did not start from there.

In 2017, he was named the US Navy ‘Officer Recruiter of the Year’, just about two years after becoming a recruiting officer.

He was honoured alongside 17 others in what the US navy said was a “testament … for their talent acquisition expertise and positive impact in their local communities.”

Agunbiade and other awardees were described as “the best recruiters in the United States Navy” who represent “the finest recruiting has to offer.”

FROM STOREKEEPER TO KEY PLAYER
Agunbiade left Nigeria for the US in 2007 and in 2008, enlisted  as a storekeeper in the navy. Five years later, he was commissioned as an officer and would later join Camp Lemonnier where he now plays  a key role in naval operations across Africa.

The cash disbursement officer he managed constituted nearly 70 per cent of the navy’s overseas disbursing volume, the agency said, while as the only permanent US base in Africa, the camp has about 4,000 joint and allied forces military and civilian personnel.

In his position, Agunbiade also plays an important role in America’s focus on rebuilding military readiness and sustaining US-Africa relationship.

Camp Lemonnier is also said to provide “higher-level service in support of combat readiness and security of ships, aircraft, detachments and personnel for regional and combatant command requirements while also equipping operations in the Horn of Africa.”

‘IN ALL YOU DO, GIVE IT YOUR BEST SHOT’


Agunbiade is guided by two major principles in life: “Treat people with respect (and) always give your best in what you do—my dad taught me that.”

In an interview with DVIDS, a defense information platform, he credited his successful career to the lessons he learnt as an immigrant in the US and while in Nigeria.

As the first child of his family, the officer hopes his first child will take after him and enlist in the US navy.

“I pray my son chooses to join the Navy for three reasons. First, I hope he does it so he can appreciate what the country has given our family. Second, it will teach him respect for diversity, and third, I hope he does it because this uniform has changed my life and I know it can change him for the better, too,” Agunbiade once said.

“The best part about being in the Navy is the travel, especially when I was on a ship. I’ve been able to visit 30 countries without paying anything out of pocket.”

LOVER OF GOD, FAMILY AND ARSENAL
Agunbiade is not just all about the US navy; he is also cherishes his family and relationship with God and, as evident in his social media posts. He has a passion for Arsenal FC.

Tweets about Arsenal littered his account including one which dates back to January 2016 in which he is seen wearing the club’s jersey, saying: “Proud to be a gunner!”

He also gives God credit for his successful career, saying in a post that “God is in every story of my life” and, in another where he shared a #throwback picture, said: “Goodness of God! O taste and see that the LORD is good: blessed is the man that trusteth in him(Psalm 34:8).”

He also shared many adorable pictures of his son who he identified in one of his tweets as Victor Olusegun Agunbiade and, in another, as the “Prince of Minnesota”.

No one seems to be prouder than the officer more than his wife, Caprice Agunbiabe, who commented on this in a Facebook post.

In a recent post in which she announced the husband’s award, the wife, who is a youth programme co-director at The Salvation Army, Mankato, US, said he gives her “great hope”, recalling how his deployment to the camp was a difficult step for the family.

She wrote: “My husband I am so Proud of you!!!! BRAVO ZULU!!!! God has shinned his light on you once again. You give me great hope as you serve unselfishly for Our Nation 🇺🇸 during this trying time.

“This particular deployment was very hard for us because this time you had to leave behind Prince Victor. Not to mention we are  currently dealing with a pandemic. Whew, but no matter what we both faced throughout our day we looked forward to FaceTime as we laugh together with Prince Victor while he entertain you with his big imagination.”