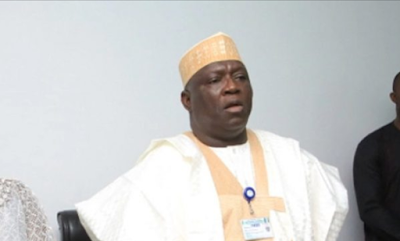 Sani Omolori (pictured), clerk of the national assembly, has been forced to retire after a failed bid for his tenure and other senior management staff to be extended.

Omolori’s retirement was approved by the National Assembly Service Commission on Wednesday.

In a document signed by Ahmed Amshi, its chairman, the commission also approved the retirement age for national assembly staff as 60 years of age or upon 35 years of service.

Omolori failed to leave despite being due for retirement.

An illegal plot by the previous assembly saw the conditions of service of the national assembly staff being amended, increasing the requirement of retirement for the staff to 65 years or 40 years of pensionable service.

Some other senior management staff of the national assembly were affected by the new development.

“To this effect the commission has approved the immediate retirement of staff of the National Assembly Service who have already attained the retirement age of 35 years of service or 60 years of age.

“Retirement letters would be issued to the affected staff accordingly.”

TheCable had reported how a bill tagged the “Retirement age and conditions of service bill”, increased the requirement of retirement for the staff to 65 years or 40 years of pensionable service, contrary to civil service rules.

Sources privy to the matter that  the bill was secretly approved towards the end of the tenure of the previous assembly despite rejection by many lawmakers, including those now in leadership positions at the two legislative chambers.

Although the amendment covers all staff of the national assembly commission, Omolori and some top officials including Giwa Anonkhai, clerk of the house of representatives and Olusanya Ajakaye, secretary of the National Assembly Service Commission (NASC), were the main beneficiaries.

Folasade Yemi-Esan, head of service (HoS), recently faulted the attempt to extend the tenure of the affected national assembly staff through a memo to Senate President Ahmad Lawan and Femi Gbajabiamila, speaker of the house of representatives.

Yemi-Esan had argued that the public service rules provide only “for attainment of 60 years of age or 35 years of service for an officer to retire, whichever comes earlier.”