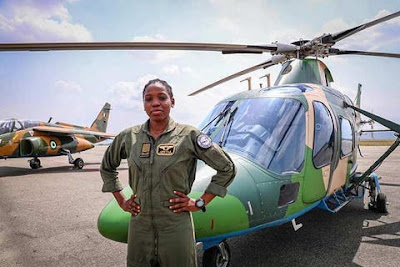 The Nigerian Air Force on Friday stated that it was investigating the circumstances surrounding the death of its Flying Officer, Tolulope Arotile, in a road accident, adding that two persons were being held.

The NAF Director of Public Relations and Information, Air Commodore Ibikunle Daramola, stated these in an interview with our correspondent, saying at the end of the investigation, “whatever information needs to go out will go out.”

The NAF spokesman later in a release on Friday noted that Arotile would be buried Thursday, July 23, at the National Military Cemetery, Abuja, with full military honours.

The NAF noted that it would continue to support female pilots’ training as 11 were currently undergoing training within and outside Nigeria.


The country was thrown into mourning on Tuesday when the NAF first announced that Arotile, Nigeria’s first female combat helicopter pilot, died at the NAF base in Kaduna State from a road traffic accident.

The air force said the female officer sustained head injuries from the accident when she was “inadvertently hit by the reversing vehicle of an excited former Air Force secondary school classmate while trying to greet her.”

Arotile, a member of the Nigerian Defence Academy Regular Course 64, hailed from Iffe in the Ijumu Local Government Area of Kogi State, and contributed to the efforts to rid the North-Central states of bandits and other criminal elements by flying combat missions.

She was particularly a squadron leader in Operation Gama Aiki in Minna Niger State.

Notable Nigerians, including President Muhammadu Buhari had since Wednesday expressed shock over her death.

A Yoruba socio-cultural organisation, Afenifere, however, on Thursday raised suspicion over the death of the female officer, rejecting the road accident explanation and calling for a Coroner’s Inquest into her death.

Speaking in an interview, NAF spokesman, Daramola, said, “First of all, in my first statement, I said she died from a road traffic accident. I further clarified the nature of the road traffic accident where one of her excited classmates who saw her reversed his car which led to him hitting her and knocking her down. This led to head injuries and a lot of haemorrhaging which ultimately resulted in her death.

“The two boys are in custody and the NAF will do a thorough investigation into the matter. It is a routine process – our own processes that are ongoing because it happened inside a NAF base. At the appropriate time, whatever information needs to go out will go out. But we cannot pre-empt that investigation process.

“Whatever needs to be known will be known; it is standard practice. So, we are investigating the circumstances leading to her death by a road traffic accident. It is an investigation because it may go beyond NAF.”

“Meanwhile, the Chief of the Air Staff, Air Marshal Sadique Abubakar, has received some members of the Federal Executive Council as well as members of the National Assembly who visited him at Headquarters NAF at various times on Thursday.”

Meanwhile, some Nigerians on Twitter have said the Chief of the Air Staff, Abubakar, must provide more explanations into the cause of Arotile’s death, adding that the “accident theory” was untenable.

Nigerians sent various messages to the CAS via his Twitter handle betweeen Wednesday and Friday evening, after the air chief put out a condolence message on Arotile.

Abubakar had said on Twitter, “I was heartbroken when I received the sad news of the death of Flying Officer Tolulope Arotile in Kaduna. Tolulope, who was winged in October 2019, was one of our shining stars.

“She was a very intelligent, disciplined confident and courageous young officer. As a squadron pilot in Operation Gama Aiki in Minna, Niger State, she flew her quota of anti-banditry combat missions to ensure a safer Nigeria. I condole with the family over this irreparable loss and pray that God grant her soul eternal rest.”

A Nigerian, Mr Adehola Adeola, replied the air chief, “Thank you, Sadique. Honestly, this statement is unacceptable. Now, get honour by setting up a fact-finding panel to inquire about the death of Tolulope. The death of Tolu is suspicious under a government that sends soldiers to a war front but keeps releasing terrorists they subdue and arrest.”

Another commentator, Jacobson Bright, said, “Very suspicious and shady; I am beginning to see reasons why Nigerian soldiers are voluntarily resigning their appointments. How could that promising, untapped talented young lady just die like that? Somebody must come with better explanations. Something is fishy about her death.”

Another person, Mazo Ezinwa, replied to the air chief, “Sir, someone needs to be held accountable. We refuse to believe this national asset died by accident. Investigate her death; that’s what we’re demanding for – justice for Arotile.”

Yet another Nigerian, Emmy Bac, said, “I honestly think there should be an inquiry into the sad loss of the celebrated young lady. Accidents do happen, but this should not just be accepted as a usual accident. We can be less flippant with the sad loss of a national asset of this nature.”