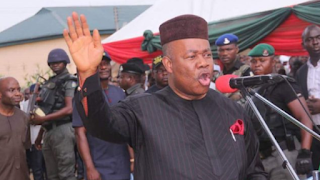 The House of Representatives, on Tuesday, insisted that Godswill Akpabio, Minister of Niger Delta Affairs, must publish names of lawmakers who allegedly benefitted from contract racketeering in the Niger Delta Development Commission, NDDC.

Akpabio had during an investigative hearing alleged that some National Assembly members controlled most of NDDC’s contracts.

Against this backdrop, the Speaker of the House of Representatives, Femi Gbajabiamila had given Akpabio 48 hours to publish the names.

In line with the directive, Akpabio wrote a letter to the Speaker where he named some lawmakers who allegedly benefitted from NDDC‘s contract racketeering.


Some of the lawmakers named in his letter by Akpabio have denied involvement with NDDC.

However, a statement by the spokesman of the House of Representatives, Benjamin Kalu described the Minister’s letter as a deflection from the ongoing probe which Nigerians should ignore.

Kalu disclosed that the Minister in his letter to Gbajabiamila exonerated the 9th National Assembly of any involvement in NDDC’s contract racketeering.

The statement reads: “Nigerians encouraged to ignore the deflections and query ₦81.5billion spent by IMC

“The Minister claimed under oath that 60% of all the NDDC projects under investigation were awarded to members of the House between the months of January and May 2020.

“Following this disturbing allegation, the leadership of the 9th House issued a 48-hour ultimatum to the Minister to publish a list of the legislators allegedly awarded 60% of the entire projects of NDDC between January and May 2020.

“Instead of publishing the list for the world to see in the interest of transparency, the Minister in his usual diversionary tactics, chose to send an irrelevant 8-paragraph private letter to the Speaker regarding projects of 2018 which pre-date the 9th House of Representatives

“The House, therefore, reiterates that the Minister was given an ultimatum to publish names and not to write a personal letter to the Speaker. The Honourable Minister is hereby cautioned to desist from spinning tales and is invited to go public as instructed.