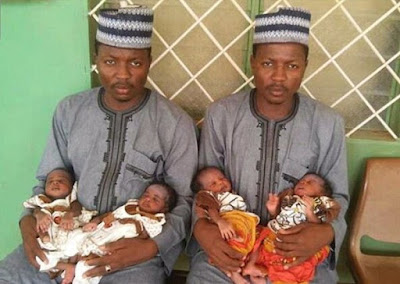 They are identical twin brothers; they married women who are also twins. Their wives became due for delivery almost at the same time and both gave birth to twin children as well five years ago, albeit, through cesarean section (CS) which was carried out on the women about 48 hours apart.

Any inquisitive individual would readily ask if it was some twin party or, at best, if both intentionally impregnated their wives at the same time, even when such an idea is scientifically counter-intuitive.

More is that the real picture is a bit different from what has been circulating on social media platforms. It is true that Sa’ad and Sa’eed Yusuf, the twin brothers from Dutse LGA in Jigawa, tied the knot on August 30, 2014 and welcomed their beautiful sets of twins in June 2015.


Pictures of the brothers, however, went viral on different social media platforms on Monday, with speculations that they had recently welcomed the twins.

Reacting to the misleading online reports in a chat with TheCable Lifestyle, Sa’ad, one of the fathers, said the twin children celebrated their 5th birthday last month.

Contrary to online reports, he added that there was a two-day interval between their births.

Sa’ad also expressed disappointment that some popular social media figures had put out his personal story and pictures, spreading misconceptions without reaching out for consent.

“I wonder why people change the format of a story without getting in touch with the persons involved. The thing is that we’re twins, and we gave birth to twins. We’re both also married to twins. Reports that they were all born on the same date is wrong,” Sa’ad, who has fathered other children, explained.

“Even if we would have wished they were all born on the same day, we can’t change the destiny of such. We couldn’t do that one. Because all the mothers underwent cesarean section.

“There was a two-day space between the two twins. When people spoke of this on social media, they made it sound like it happened yesterday.

On whether they had planned to replicate their own story with the infants by ensuring they were given birth to on the same day, he dismissed such insinuation, saying women can’t get pregnant at the same time on purpose.

“I think it has to do with hereditary traits. Since then, we’ve given birth to younger children that are not even twins. Right now, we’re in Jigawa state,” Sa’ad told TheCable Lifestyle.

“For CS, the condition states that, maybe the mother couldn’t give birth by herself, they then get the consent of the father. We were all at the maternity at the same time, waiting.

“They indicated the first couldn’t do it herself. After two days, the second indicated as well. We didn’t plan anything like this because you can’t possibly impregnate women at the same time.”