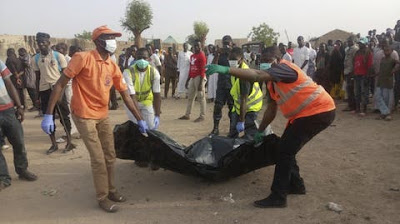 Borno State Commissioner of Police, Mohammed Aliyu on Friday said the death toll during Thursday’s attack on Maiduguri by suspected Boko Haram has risen to six.

The Commissioner also disclosed that the number of those fatally injured has risen to 27.

The Commissioner of Police, who provided more updates on the incident to journalists, said five more bodies were discovered between Thursday (yesterday) and Friday (today).

Aliyu said that the victims included one female at Gwange II and five others who were hit by the explosives in separate locations within the city.


He said following the incidents, the command in collaboration with other security agencies, had deployed a total of 7,000 personnel to secure the entire city for the Eid-el-Kabir celebration in order to prevent a breach of peace.

The Commissioner said that the personnel comprising of the Mobile Force, Counter Terrorism Unit, Special Protection Unit were deployed in 31 designated mosques for the Eid-EL-Kabir congregations.

“Also deployed are personnel from the Explosive Ordinance Department, Special Anti-Robbery Squad men with armoured vehicles and sniffer dogs, Civilian Joint Task Force, Hunters and the Rapid Response Squad to secure the outskirt of the city,” he said.

Aliyu added that the measure was to ensure a hitch-free Eid celebration and also enhance security in the state.

He urged the people to be on high alert and avoid large gatherings as well as report any suspicious activities around them to security agencies.

He also warned youths in the state to desist from any act capable of disrupting peace, warning them of the full wrath of the law.

Gunmen suspected to be insurgents had on Thursday, fired four mortars in the city as Muslim faithful in the town were making preparation for Eid-el-Kabir festival.

The loud explosions had sent many residents scampering for safety

The mortars were shot at innocent civilians in Gwange II Primary School, Customs Area near Mansur Motors, and Gidan Ayaba Ngudiba line, all in Maiduguri metropolis.