Lawan denies plans to run for president in 2023 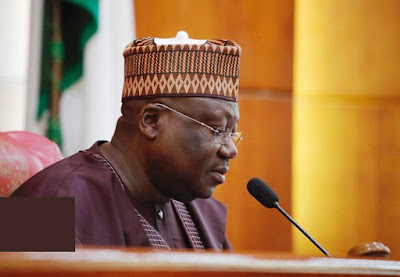 Ola Awoniyi, Special Adviser on Media to Senate President, Ahmad Lawan, says his principal has no plans to run for president in 2023.

The media aide made this known in a statement on Saturday while reacting to certain reports published by media outlets claiming otherwise.

Awoniyi said it is premature for anyone to start thinking about 2023 politics now, noting that the Senate President is preoccupied with extant issues of governance.

The statement partly read, “The attention of the office of the President of the Senate has been drawn to a rather puerile media report that the Senate President, Ahmad Lawan, is making plans to run for president in 2023. The report was first published by the Daily Independent newspaper of Friday, 17th July, 2020 and reproduced later by the Sahara Reporters.


“The report apparently has its source in beer parlour gossips and should be treated with the contempt which it and those who concocted it deserves.

“It is true that the Senate President was involved in the consultations that President Muhammadu Buhari held prior to the last emergency meeting of the National Executive Committee of the ruling All Progressives Congress.

“But there was nothing extra-ordinary in his involvement in such consultations, given his status as holder of one of the highest political offices in Nigeria and on the platform of the APC. Such is required of any concerned member of the party.

“The Senate President believes that it is premature for anybody to be talking now about 2023 when all hands should be on deck against the myriad of challenges that faces our nation in this period.”