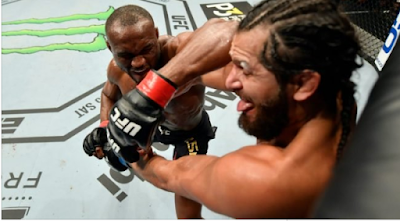 The 35-year-old stepped in at six days’ notice to challenge Usman after Gilbert Burns tested positive for COVID-19.

The 33-year-old Nigerian, who had the best win record in the UFC, has now gone 16 fights without a loss.

Before the UFC 251 bout, Kamaru said he would beat his opponent to submission by breaking his spirit and gaining a first-round knockout victory.

“There is something about a man when you break his spirit. When he talks about you, he knows that you’re better than him.

“I’d rather beat a guy with a wide margin that they never ever dream of competing with me again and that’s how I’m going to approach this fight.

“This is the fight people want and the fans are going to get it. The fans know if an opponent is a challenger or not. Jorge had such an amazing year in 2018 and 2019 and that puts him in that category. He is the next biggest challenge for me and I’m excited. I can’t wait.”

He is also number six in the UFC men’s pound-to-pound rankings.