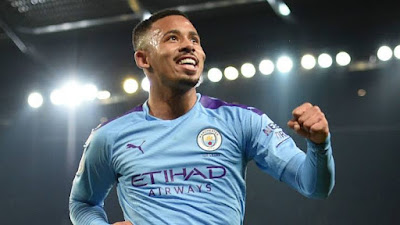 ‌
Gabriel Jesus ended his Manchester City goal drought as the Brazil striker netted for the first time in 10 games to spark a 5-0 rout of Newcastle on Wednesday.

Jesus finally stepped up to the plate with a first-half strike at the Etihad Stadium.

It was Jesus’s 19th goal of the season, but just his second in his last 12 Premier League matches, banishing a nine-game barren run in all competitions.

Guardiola’s side have only pride to play for in the remainder of the Premier League season after Liverpool took the title.

But second-placed City, who won the League Cup in March, still have silverware in their sights as they await the result of their appeal against a two-season ban from European competition.

They face an FA Cup semi-final against Arsenal on July 18 and the second leg of their Champions League last 16 tie against Real Madrid in August, with City holding a 2-1 lead.

After losing two of their last three league games, Guardiola had warned his players to cut out the mistakes that have blighted their season.

With that in mind, Guardiola will be encouraged by the ruthless way they put Newcastle to the sword.

Having beaten Newcastle in their last 10 meetings in Manchester, while also knocking them out of the FA Cup quarter-finals on Tyneside recently, City might have hand-picked the Magpies as their ideal opponents to get back on track.

Guardiola made five changes to the side beaten at Southampton as Kevin De Bruyne returned to the starting line-up, while John Stones started for the first time since the coronavirus hiatus.

City were quickly on top and Mahrez cut inside to test Newcastle keeper Martin Dubravka with a low drive from the edge of the area.

Guardiola insisted this week that Jesus had produced “one of his best performances of this season” in Sunday’s defeat at Southampton.

The 23-year-old repaid Guardiola’s faith in the 10th minute, meeting Silva’s pass with a close-range finish for his first goal since netting at Real Madrid in February.

City midfielder Phil Foden dragged his shot wide from a tight angle after a dangerous burst into the Newcastle area.

Guardiola’s men were in complete control and doubled their lead in the 21st minute.

Foden sent De Bruyne away down the left side of the Newcastle area and the Belgian’s cut-back was slotted home by Mahrez for his 12th goal of the season.

De Bruyne’s 18th league assist of the season was testament to the remarkable consistency that makes him a contender for Player of the Year honours.

Foden should have made it three, but the 20-year-old shot wide from six yards out before missing with a close-range header from De Bruyne’s cross.

City’s relentless pressure produced a third goal in the 58th minute when Jesus’s raid panicked Matt Ritchie into a desperate clearance that cannoned off Fernandez into his own net.

In the final months of his last season with City, Silva remains a class act and the Spanish playmaker made it four with a fine free-kick that left Dubravka rooted to the spot in the 65th minute.

Sterling’s 90th minute tap-in made it 17 goals for City in their four home games since the restart.