I didn’t get N300m fence construction contract from NDDC -Akpabio 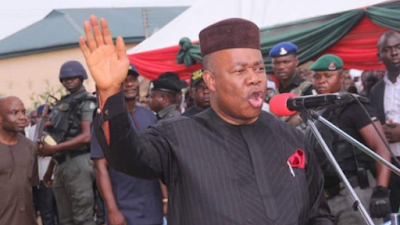 Godswill Akpabio, minister of Niger Delta affairs, says he did not get any N300 million fence construction contract from the Niger Delta Development Commission (NDDC).

Speaking with reporters after he appeared before an ad hoc panel of the senate on Friday, Akpabio said the contracts  were never approved.

The panel is probing the alleged mismanagement of N40 billion by the interim management committee (IMC) of the commission.

The decision to probe the commission’s interim management sparked allegations and counter-allegations.

The minister said his request Nwaoboshi leaked to the media was not an approval and that he has never been a contractor for the NDDC.

“Maybe when I was in the senate… that thing is dated 2017… I must have made a recommendation that they should consider these (projects) but they were not considered,” he said.

“Those jobs were not paid, not one naira was paid and when you make recommendation it is not that you are being given a contract. It is that if there is a job in your constituency when they are going through ‘due process’ they will advertise that job and that will awarded to the one that wins the bid.

“It is not that when a senator makes a suggestion to an agency – whether it is NEMA, NDDC – that the senator will automatically become the contractor. For the fact that the paper was written on the minority leader letter-headed paper shows that it was not an award of contract.

“Award of contract would have been on an NDDC paper so when I saw it, I didn’t think it was worth responding to and as minister of the Federal Republic of Nigeria, I owe the nation but good service.

Akpabio said N40 billion is not missing from the coffers of the commission and that a backlog of contracts are being paid for.

“On the issue of missing N40 billion, I came to honour my colleagues, I would be a senator forever, they have the right to look into issues when they are raised,” the minister said.

“It is not that money was missing, the Central Bank of Nigeria (CBN) harbours the accounts of the NDDC, so we can’t take out N40 billion without it being known.

“When you inherit a commission, you inherit the liabilities and the assets. They had no option because of garnishee orders, people have gone to court, some have even died. It couldn’t have come to minister because the threshold of the management is below N250 million. My job was to come here and also listen because it will help me to know what they are expending.”